Apple’s main video editing program on macOS is iMovie. It’s enough for most, but it doesn’t satisfy professional and more advanced editors. Here are the best alternatives to iMovie.

Here are other video editing programs that offer more to creators that iMovie currently does not.

Bought by Apple in 1998 and becoming part of Final Cut Studios in 2006, Final Cut Pro was aimed toward more professor creators and independent film and television producers. The application covered all aspects of offline and online video editing.

In 2011, Apple made the controversial decision to redesign Final Cut Pro from the ground up and give the application a more “app-like” experience.

Final Cut Pro allows creators to dive into more professional and customizable features that iMovie does not. It opens the door for more fluid edits to be made.

Many people who use the software enjoy the simplicity the application brings when starting. Though it is not seen as “entry-level” software, many do see how the easy-of-use navigation of the software was inspired by iMovie.

When starting with Final Cut Pro, the application editors to create, work, and save projects directly and allow on onto an external hard drive. This does not slow down your computer or take up storage on your device.

Final Cut Pro allows real-time multi-cam editing of up to 16 audio and video channels. iMovie allows up to two videos.

Customization is heavily improved in Final Cut Pro over iMovie, by allowing creators more templates to choose from for title animations (you can select from the ones provided or purchase additional ones), keyframing (which allows creators to set animations to be done at certain times (example: zooming in and zooming out of a subject at a certain part within the film)), and full-color correction and grading tools through color curls and color wheels.

Creators are also able to customize the aspect ratio and frame rate of their projects.

Final Cut Pro is priced at $299, with no app alternative for iOS or iPadOS. The purchase covers all future updates and allows the software to be installed on up to five devices at the same time.

When introduced to the public in 1991, Adobe Premiere Pro was the standard for professional video editing for news broadcasting and featured films. Since then, it has been updated to give editors more functionality through the program with new and enhanced features. 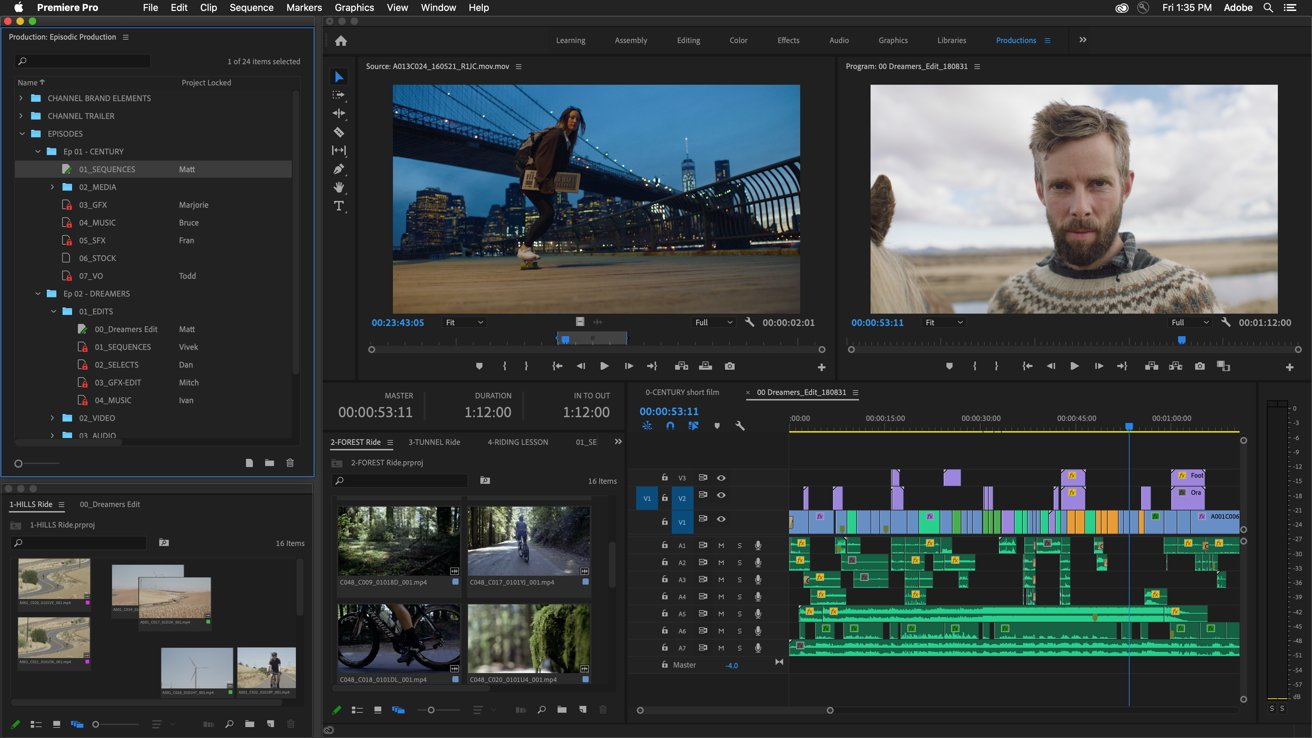 While the idea of ​​software being presented as “more professional” might give the illusion that it is hard to navigate, Premiere Pro does the opposite. Though the learning curve from the beginning might be a lot, the application provides a versatile experience by providing a useful experience for both beginning and advanced creators.

Adobe Stocks allows editors to be able to add visual and audio components to their projects without having the leave the application to find them.

Continuity amongst other Adobe programs is another area Premiere Pro shines. The editing software connects with Illustrator and Photoshop to allow creators to create graphics in one application and export them to another seamlessly.

Adobe Typekit also allows creators to utilize the Essentials Graphics panel, which allows them to customize and create unique title graphics. Typekit allows you to choose from thousands of different fonts to use for text in your project.

For audio features, Premiere Pro offers a bunch of options to choose from. The Essential Sound Panel can be seen as very useful to creators by the program fixing audio mistakes, adjusting volume, and adding special effects to sound bites when seen fit.

Visual and color effects are strong points of the video editing software. You can use color grading and edit color directly in apps such as lighting, contrast, and color hues and adjust an area. Creators can also use the wide range of options given by the visual effects library to add Cinematic filter presets to multiple areas, such as transitions and green screen keying.

Adobe Premiere Pro can be subscribed to for $20.99 a month. Currently, there are no other payment plan options available.

Just like other professional editing software, DaVinci Resolve offers the same level of customization within its application. While offering an intuitive graphic interface, DaVinci supplies an easy way to create professional-styled projects. 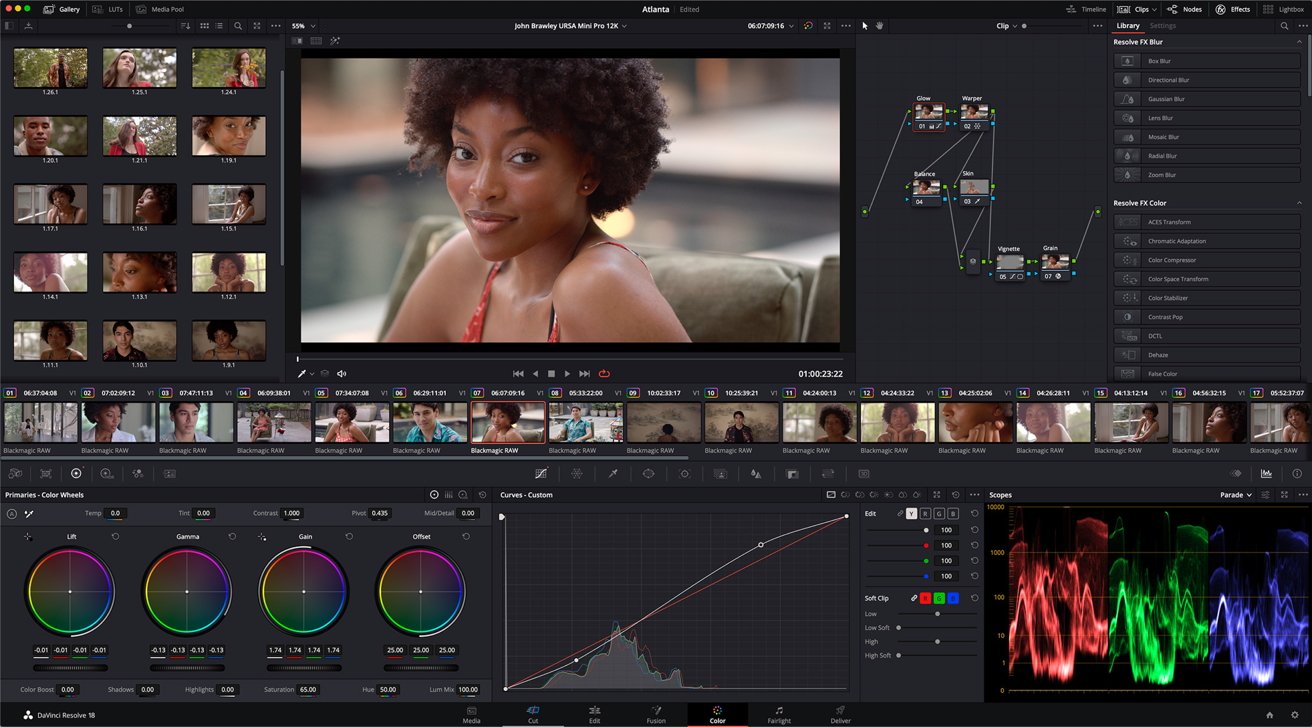 The simplistic interface DaVinci offers makes it easy for creators to access the features they want most. Various connections to external devices make it simpler for editors to transfer files between devices.

While DaVinci may primarily be used as video editing software, it can also allow the creator to edit photos on the platform as well. The software offers adjustable parameters, image stability tools, color inversion, timeline editing, and a traditions and effects library.

Multiple people can work on a project collaboratively in real-time through DaVinci. This is a feature that iMovie currently lacks.

Just like with Adobe Premiere Pro, DaVinci can run on multiple operating systems. The program can run on macOS, Windows, and Linux.

The verdict with iMovie

iMovie is good video editing software for people who want to edit short films, vlogs, or compile a group of various videos together with simple edits and transitions. It’s also very clearly aimed at the “average Joe” and not the pro.

While the free price tag is hard to beat, and what you get for it is not shabby, the limitations for editing style may push in the direction of more advanced video editing software creator.

iMovie is preinstalled on Macs and can be downloaded from the app store for iPhone and iPad owners.