In July of 1997, five months after Apple bought NeXT and brought him back into the fold, Steve Jobs became Apple’s de facto interim CEO, kicking off the most successful comeback by an executive in the history of American business.

The departure and return of Steve Jobs from Apple is as central to Apple history as just about anything else. It’s been pored over in numerous books, two different feature films, more than one documentary, and more than a few articles.

Both his exit and his coming back got ugly at times, too, but things happening the way they did help make the many Apple triumphs of the last two decades possible.

Steve Jobs cofounded Apple in 1976, although he was never the company’s CEO during his first stint with the company. Apple was instead led by a succession of chief executives, starting with Michael Scott and Mike Markkula, until Jobs recruited John Sculley from PepsiCo in 1983.

Jobs and Sculley soon clashed, and Apple’s fortunes took some turns for the worst. Then, following a failed coup, Jobs was demoted, which is what led to his departure in 1985.

Steve Jobs went on to found NeXT Computer in 1988, while Apple’s struggles continued throughout the early to mid-1990s. Partnerships with firms such as IBM, and promises of radically improved Mac operating systems, all fell apart.

It wasn’t especially to get Steve Jobs back into Apple, but that’s what happened. With the NeXT deal, Jobs returned to Apple as an “adviser,” reporting directly to then-CEO Gil Amelio.

Amelio, the son of Italian immigrants, holds a Ph.D. in physics and had worked as a researcher. He was CEO of National Semiconductor and served on Apple’s board for two years before he took over the CEO chair in 1996.

“This is a complementary arrangement, and the pieces fit together better than any other alternative we looked at, and it will launch a new round of technology,” Amelio said at the time of the Apple/NeXT deal announcement.

The return from Jobs’s perspective

Later, Jobs told a story in a Q&A about his decision to return.

“When I was trying to decide whether to come back to Apple or not I struggled. I talked to a lot of people and got a lot of opinions,” Jobs said in 2001, as reported by Apple intern-turned-blogger Jonathan Berger.

“And then there I was, late one night, struggling with this and I called up a friend of mine at 2am,” continued Jobs. ‘I said, ‘should I come back, should I not?’ and the friend replied, ‘Steve, look. I don’t give af*ck about Apple. Just make up your mind’ and hung up.”

“It was in that moment that I realized I truly cared about Apple,” concluded Jobs.

Subsequently it was speculated for years just who this friend on the phone had been. Much later, Jobs told biographer Walter Isaacson that it was Intel’s Andy Grove.

Jobs’ return to the company was not a miracle that turned around the firm in a happy instant. Instead, it was followed by a series of bad events for Apple.

For instance, Macworld, held in San Francisco shortly after the announcement of the NeXT acquisition, was a disaster. It was plagued by a malfunctioning TelePrompter and Amelio forgetting to introduce guest of honor Muhammad Ali.

Then in February, Apple announced its worst quarter ever, and that led to the layoff of 3,000 employees. Then, too, their redundancies happened just as various employees either from NeXT or otherwise loyal to Jobs were promoted throughout the company. 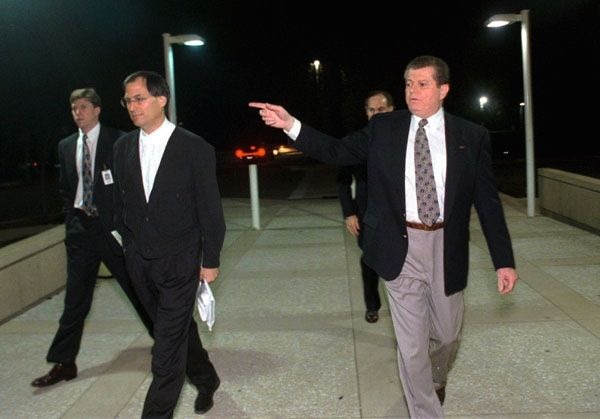 Amelio was still in charge, but he wasn’t having an easy time. He faced a hostile takeover attempt by Oracle’s Larry Ellison, and although it failed, it was accompanied by someone selling off 1.5 million shares of Apple stock.

It later came to light that Jobs was supportive of Ellison’s move, and that it was Jobs who had sold that stock.

Throughout all of this, Amelio lost the confidence of his board, and over the July 4 holiday in 1997, Apple Chairman Ed Woolard informed Amelio that he was out as CEO. Officially he resigned, on July 9, 1997.

Amelio was CEO of Apple for exactly 500 days and later wrote a memoir, called On the Firing Line: My 500 Days at Apple. Amelio may have been one of many Apple CEOs to leave involuntarily — but he was also the last to do so.

Following his departure, Jobs was not immediately named CEO or even interim CEO. Reportedly he specifically asked to not be considered for the top job at the time and was even put in charge of finding a permanent replacement.

Yet it soon became clear that Jobs was in charge, and in September of 1997, he was officially named interim CEO. He kept the interim tag for more than two years, finally introducing himself as the permanent CEO at Macworld Expo in 2000. 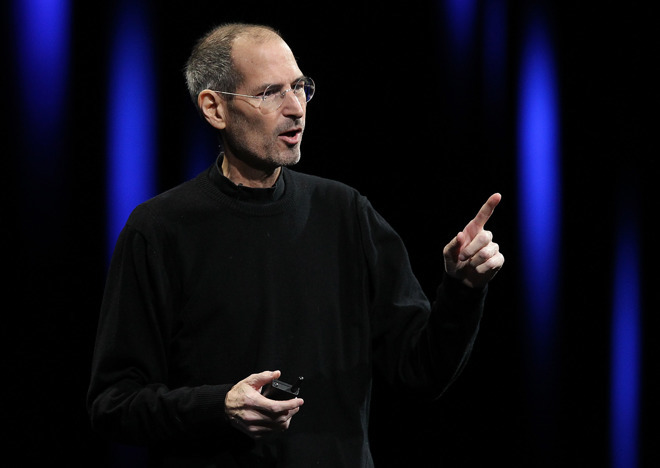 Once properly in charge, though, Jobs moved quickly — and where he felt necessary, also ruthlessly. He canceled products released during his exile, such as the beloved if poor-selling Newton, and the less-remembered Cyberdog OpenDoc applications suite.

That August, he announced what was then a shocking deal with Microsoft, in which Bill Gates’ company agreed to invest $150 million in Apple.

At this time, Jony Ive was promoted to Senior Vice President of Industrial Design, helping bring about an first run of innovation and success. The iMac arrived in 1998, the iPod and Apple Store in 2001, the iPhone in 2007, the App Store in 2008 and the iPad in 2010.

Apple had been within 90 days of bankruptcy when Jobs returned. But within a comparatively short time, it was climbing back up into being hugely profitable.

That’s obviously continued since, to the point where Apple is now often officially the most valuable company in the world.

It continued rising toward that point while Jobs remained CEO, which he did until resigning for health reasons in August of 2011. He then named Tim Cook passed his successor, and Jobs away two months later, on October 5, 2011.

Not everything Steve Jobs did at Apple, even during his triumphant second run, was an unalloyed success. MobileMe, a precursor to the far more successful iCloud, was a public failure.

Jobs tried some underhanded tactics to get rid of Amelio and regain control of Apple. And yet there’s no question that he was the best possible person for Apple in the end.

Tim Cook has since had a decade in which he’s taken Apple to stratospheric profitability, but without Jobs, it would probably have gone out of business in the late 1990s.

His striking effect on Apple, and on technology, on business too, was so significant that his work continues to be influential. Not only did the iPhone become, and continue to be, the greatest-selling product of all time, but in 2022, Jobs was posthumously awarded the Presidential Medal of Freedom by President Biden.