The OWC Gemini is a dock that offers not only grants a few more port options for your Thunderbolt 3-equipped Mac, but also local storage.

There are a few “problems” that we hear about as it pertains to Apple’s modern Mac lineup. More connectivity options than Apple offers has historically been one, which is solvable with a dock or a hub. The other frequent complaint issue is storage. The main solution to this is external enclosures, either networked, or available locally.

For folks that need both, the OWC Gemini may be a decent package to help with both problems at the same time.

The OWC Gemini is a Thunderbolt 3 dock that provides expanded connectivity to a connected Mac. At the same time, the enclosure is able to contain a pair of hard drives or SATA SSDs, providing expanded storage capacity for the user.

The Gemini is nondescript, consisting of a black aluminum enclosure with vent holes, status indicators, and an SD card slot on the front. A fan exhaust and most of the main connectivity is on the back.

It’s not really intended to be a portable dock, with its unloaded weight of 3.53 pounds making it not ideal for portable computing. That said, it’s also fairly long and tall for a dock or hard drive enclosure, at 9.4 inches long, 5.8 inches tall, and 3.3 inches wide.

Cooling is provided both by the heat dissipation properties of the case itself and from the 60mm fan at the back, which runs at up to 3,000RPM.

The Gemini will probably be louder than an Apple Silicon computer it is connected to. We had a baseline of 36 dBa of ambient noise measured with a Kanomax model 4431 audiometer, with the test gear on the desk at hand-height, about at a distance of about three feet.

When chattering away under load, the Gemini with two hard drives hit 44 dBa. With two SSDs, it ran at 40 dBA. For reference, The M1 Ultra Mac Studio while idle hit 39 dBa idle and 42 dBa under load, with the 2018 Intel i9 MacBook Pro at idle running at 40 dBa, and 45 dBa under heavy load.

The dock element is fairly straightforward, as it offers a pair of Thunderbolt 3 ports, with one used to connect to the host Mac. The other is used for daisy-chaining with other Thunderbolt devices.

At the front is the SD 4.0 card reader, capable of reading UHS-II cards at about 270 megabytes per second by our testing. At the back, the Thunderbolt 3 ports are accompanied by two 5 gbit/second USB 3.1 Gen 1 ports, as well as a DisplayPort 1.2 connection, Gigabit Ethernet, and a lock slot.

You can use both DisplayPort and Thunderbolt to connect to monitors, with it able to handle one 5K-resolution display at 60Hz, or two 4K displays at 60Hz at most. The Thunderbolt 3 connection could be used for a 5K-resolution Thunderbolt 3 display, though this does drop down to 4K 60Hz with a USB-C display or adapter.

OWC does add that the DisplayPort doesn’t support DP++, and it isn’t compatible with Apple Cinema Displays that use a Mini DisplayPort connection. Even if such a display is connected using a DisplayPort to Mini DisplayPort adapter, it won’t work, which OWC says is due to a limitation of the chipset it uses.

While this does seem to be an ideal dock for a limited-storage MacBook Pro, for example, it’s not going to be a single-cable solution that many would want.

There is power delivery over Thunderbolt 3, but only at up to 27 watts, which isn’t enough to adequately recharge an in-use MacBook Pro, for example. It’s just a little bit less than the 30W provided by the charger with an M1 MacBook Air.

How much of a problem this is, varies. It’s fine for the MacBook Air, obviously. If you’ve got a 2021 MagSafe MacBook Pro, then you could use that for power without giving up another port. You’re not going to recharge a MacBook Pro at any kind of speed, or while in use, without using a separate power cable.

Aside from the 27 watts to the host, the dock does provide 15W of power to the other Thunderbolt port, and normal power to USB-A.

Compatibility with Thunderbolt 2 and Thunderbolt as well, when used with a certified adapter and cable. Connection speeds slow down to 20Gbps for Thunderbolt 2, though you also lose support for notebook charging.

Inside the OWC Gemini is space for a pair of 3.5-inch SATA hard drives, though you can also use 2.5-inch SSDs if you prefer. The chassis of the dock slides out the front of the enclosure, allowing you to slide and screw in a drive to either side of the central divider.

While you could have the drives appearing independently in macOS with the dock connected, you also have the option of using its three RAID modes. This is configured by a dial on the lower-right corner of the back side.

Strictly speaking, there are two RAID modes, with the RAID 0 providing speed but no redundancy through drive striping, while RAID 1 gives users data safety with its drive mirroring. 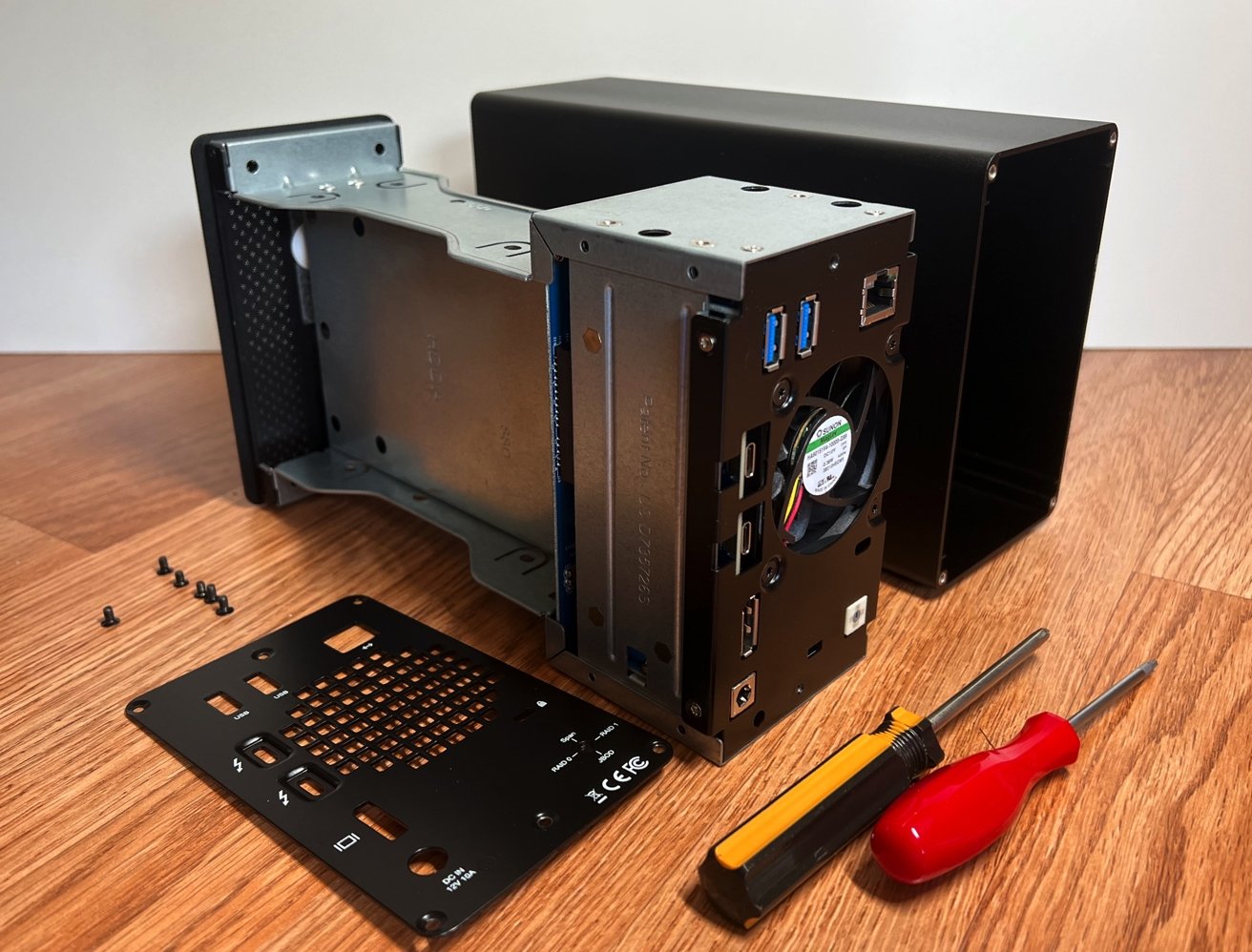 The third option is “Span mode,” which will show up both drives as a single large disk in macOS. However, while the RAID configurations require you to have identical model and capacity drives, Span mode can use drives of different capacities and sources.

Span mode is still an array, but one where the data is written sequentially across the drives. If one drive fills up, all data continues to be written to the remaining storage on the other drive.

With up to 36TB of capacity supported across the two drives, OWC says that the enclosure, properly outfitted, can provide up to 773MB/s of “real-world” performance with the drives in RAID 0. As billed, this is certainly enough access speed for high-bandwidth users, such as video editors, to use in conjunction with the Mac’s built-in storage.

OWC offers the Gemini in a number of configurations, depending on how you want to acquire your desired configuration. For the enclosure on its own, you can buy it without any drives for $319.

There are options for OWC to include drives with the enclosure, if you don’t want to go to the hassle of shopping for them. The least expensive model with storage costs $479, and includes two 2TB WD Blue 7,200RPM hard drives. For all other options, starting from the $629 8TB variant and rising to $1,199 for the 36TB configuration, OWC says it includes Toshiba hard drives, with “Enterprise” versions used from 16TB and up.

Should you buy the OWC Gemini?

We’re of a mixed mind about the OWC Gemini. We like the storage bays, and the ports that it brings to the table.

But, as with some other offerings, it just doesn’t provide enough host power for a MacBook Pro. And, the MacBook Pro owners are likely the folks most interested in this kind of combined enclosure.

It’s attractive, and works well. Speeds are good, and the extra connectivity is nice. It’s just too bad that if you want a one-cable solution for your MacBook Pro, you need to look elsewhere.

Where to buy the OWC Gemini