Apple’s catalog of iPad models covers an extremely wide range of price points for its customers. Here’s what iPad you should be getting for your budget.

Apple’s coverage of the price spectrum from budget to premium has a lot of coverage, anyone with a budget in mind for their iPad purchase to get something at their thought-of price.

With the introduction of the iPad mini 6 and the updated ninth-generation 10.2-inch iPad in September, Apple upgraded the lower section of its catalog with more performance, and in the case of the mini, a whole new design.

In March, Apple enhanced the more premium end of the spectrum with an update to the iPad Air, with the fifth-generation model now sporting the M1 chip found in the iPad Pro range.

As there are so many products on offer, there are quite a few situations where customers have to choose between one iPad with specific features or another with a different configuration. There’s always a trade-off, and sometimes it’s hard to decide.

The fall upgrades, coupled with the fifth-generation iPad Air, make the decision even harder at the two extremes of the scale.

Apple’s complete range in prices starts at $329 for the base iPad, a model that is in its ninth generation, and still a strong seller for the company. At the other end of the spectrum is the 12.9-inch iPad Pro with Cellular, which breaks the bank at $2,399 with its highest capacity option.

The current range of iPad pricing, as of March 2022

Looking at the range as a whole, there is a distinct section beyond $750 where the iPad Pro range dominates the graph. Lower down the price range, you could reasonably say that there’s a bit of a jump from the iPad to the iPad mini and iPad Air, which gives us another two ranges to consider.

There are many features of each iPad model to consider when selecting which version to buy, but there are two distinct areas to bear in mind when considering all of the trade-offs between models. The size of the ranges is determined by cellular connectivity and storage capacity. 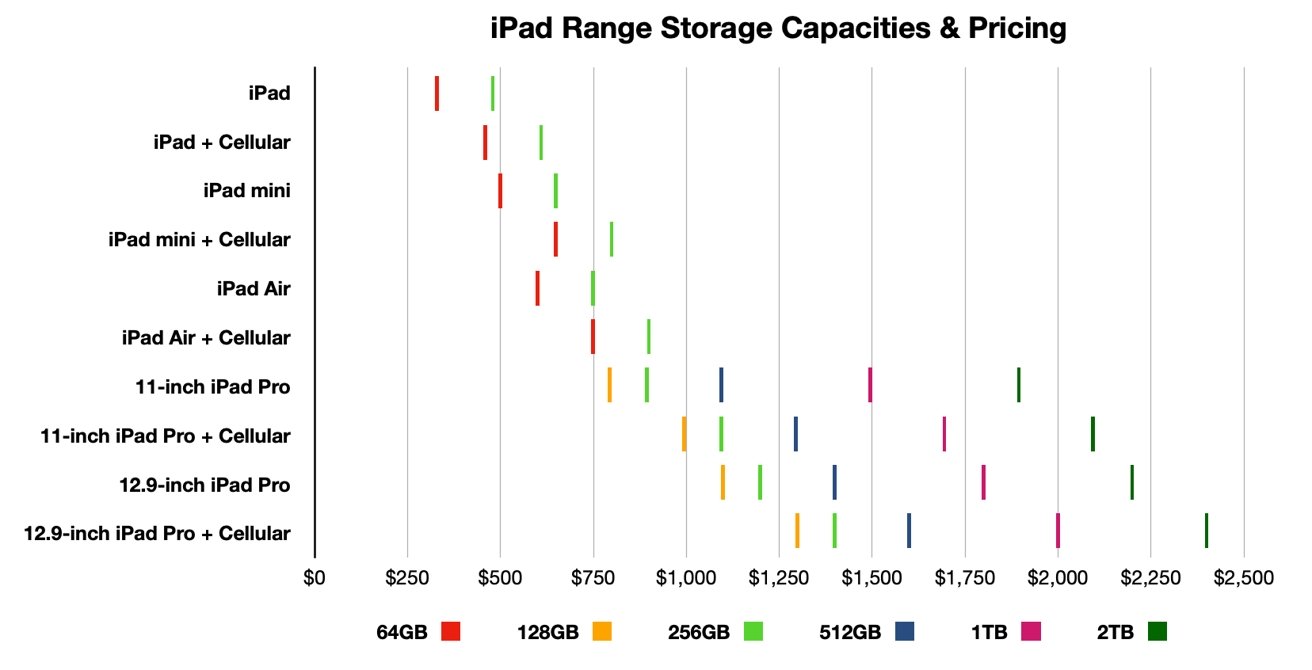 Storage capacity pricing for Apple’s iPad range, as of March 2022

Apple offers versions of its iPads as having only Wi-Fi connectivity or additional cellular service. However, the importance of Internet connectivity has led to the cellular option being a more significant consideration than before, potentially at a par with storage.

Some people may value having Internet access wherever they are more than bumping up storage. Others may not want the extra expense of cellular, which goes beyond the upgrade itself and into paying for cellular plans.

Of course, you could rely on an iPhone or another device to serve as a personal hotspot if you want the benefits of cellular without paying for the upgrade. This does, however, pass any data plan-related costs to your smartphone’s plan, as well as using extra power via the hotspot-hosting device. Still, these could be considered a reasonable compromise.

For ease of comparison, we are classifying the cellular-equipped models as a separate variant, costing between $130 and $200 as an upgrade to the non-cellular version.

The more significant element that varies the cost is storage, as the more you buy, the more the iPad will cost. The need for storage can also be a factor in determining whether to go for the higher model, as the extra features may not necessarily benefit the user as much as having more capacity on hand.

Handily, Apple has made the storage question simple for the iPad range, even more than what it does for its iPhone catalog. For all non-Pro models, Apple has limited capacities down to two options: 64GB and 256GB.

On the Pro range, Apple still offers a lot of choices, with five options between 128GB and 2TB. Arguably, these models can justify the extra capacity options over the non-Pro tablets.

This does discount the idea of ​​using cloud storage as extra off-iPad capacity, which could be helpful for those with extensive photo collections.

There’s no competition here until you get to $459, when you can get the same model with 4G LTE cellular, but even then the question is whether you want Internet wherever you go, or not. Saving money on not including cellular could easily pay for an Apple Pencil.

A slightly bigger decision is offered at $20 more, as it’s either a 64GB cellular iPad or a non-cellular 256GB version. 64GB is a little small for everyday computing, so you’re probably better off going for the storage unless you feel cloud storage services offer enough of a benefit to go for that version.

The iPad mini comes into play at $499, with its 8.3-inch Liquid Retina display, A15 Bionic chip, and 12-megapixel rear camera offering a tempting proposition, aside from its new styling. It’s certainly a better option than the 64GB iPad with cellular, and probably just beats out the 256GB non-cellular iPad as well.

For the next $100, the decision will be between those two models, until you reach $599.

At $600, the iPad Air becomes an option. A tablet that slots into the gap between the iPad range and the iPad Pro, the cheapest iPad Air could be considered a compromise between multiple different ranges at the same time.

Between the iPad and iPad mini, the Air offered a 10.9-inch display in a form that was close to the iPad mini and iPad Pro in general appearance. While offering iPad mini niceties with a larger display, it did suffer from a smaller 7-megapixel FaceTime HD and slower A14 Bionic. At least, before the fifth-generation release.

Apple’s upgrade of both the FaceTime HD camera to a 12-megapixel version with Center Stage, as well as the use of the M1, means the iPad Air is now feasibly more than an iPad mini in specification.

In both the iPad mini and iPad Air, you have very capable and quite evenly-matched devices if your budget is $600 to almost $650. Your decision here is pretty much about the form factor, in whether you want a compact tablet or one with more screen and a fair bit more power.

If screen size is important, the iPad Air makes a lot of sense at this particular price point.

It gets really tough at $649, as you have to decide between the 256GB iPad mini vs a 64GB iPad mini with 5G, and the 64GB iPad Air with a bigger screen and M1. Again, it’s primarily that tradeoff between storage and connectivity, but those needing performance may err towards the iPad Air’s M1 than 5G connectivity.

If you really want the M1 performance bump and the bigger screen, then the iPad Air will be better than the iPad mini for you.

While the range from this point onwards is dominated by iPad Pro, there is a small section at the start where both the iPad Air with cellular and iPad mini with cellular are actually viable options.

From there on in, the extra features of the iPad Pro lineup make it very difficult to justify getting either the iPad mini or iPad Air, regardless of storage capacity and the availability of cellular access. With the bigger display, increased base storage to 128GB, better camera system, and other niceties, the 11-inch iPad Pro is simply too good not to choose.

Sure, you could argue that the iPad Air is still a viable competitor to the 11-inch iPad Pro, since it uses the same M1 chip. However, the extra benefits of the iPad Pro make it a convincing argument otherwise.

At $799 point, you could go for the 256GB iPad mini with 5G, but given the 11-inch iPad Pro starts at 128GB, there’s arguably enough capacity there to nullify a lot of the attraction of more storage.

At the upper end of the iPad Air range of $899 with 256GB of storage and 5G cellular, it’s simply outclassed by the 256GB 11-inch iPad Pro for exactly the same price.

Firmly into iPad Pro territory, the cellular problem arrives at $999, which puts 128GB and 5G against 256GB for $899. The thing is, 128GB of capacity is actually quite good and not too “low,” so you’re not losing too much by opting for cellular here.

As the capacities rise up, it basically falls into deciding between a bigger screen or having cellular, or if you can wing it, both. At the high end, the storage values ​​are more than sufficient for most people, making it just a screen and 5G issue for the buyer.

Exclusive discounts are in effect on Apple’s iPad product line, with the best iPad deals at your fingertips in our Price Guide.

Easily compare discounts across popular Apple resellers on current and closeout models, plus markdowns on AppleCare. At press time, Expercom is offering 5% off every iPad model it sells exclusively for AppleInsider readers using this cost-saving activation link. Amazon also regularly offers aggressive deals on the iPad range through instant rebates and/or on-page coupons.