While many products offer USB-C port expansion functionality or the ergonomics of propping up the notebook with a physical stand, it is rare to see both combined into one product. IOGear attempts to bridge both popular product types into a single product for the ultimate convenience.

The port hub is relatively straightforward, with the expected HDMI, USB-C, and USB-A ports. A Gigabit Ethernet port is less common on such products, so it’s a welcome addition here.

One notable omission was an SD card slot alongside a Micro SD card reader. Still, tradeoffs were minimal.

A total of six different ports are featured on this docking stand.

The first three are data ports. Two USB-A ports are built to the USB 3.2 standard, which allows both to support up to speeds of 5 Gbps. Supporting the same data transfer speed is a separate USB-C data connector.

A fourth connector, using the same type-C interface, is a Power Delivery port that supports up to 100W input to the dock. The stand itself consumes 12W, leaving 88W to power the connected laptop.

There is a Gigabit Ethernet port that supports up to 1 Gbps in wired Internet connections.

The big surprise was the inclusion of a 100W passthrough Power Delivery USB-C port in a hub that uses a single cable in the 4K Dock Stand. We’ve seen hubs that take up both USB-C ports on one side of a MacBook feature Power Delivery technology, as occupying all of what are the only charging-capable ports would necessitate.

With its width covering only around a third of the width of the 16-inch machine, the initial setup of the stand required some delicate positioning.

The compact, portable metal frame unfolded into a flat-footed stand with metal supports slanting the laptop towards the user. There are five sets of channels on either side to allow the user to pick their preferred angle of the keyboard and trackpad.

The rods had to be slotted into one of the five notch sets etched into the metal to create a stable stand. Once the stand has been correctly set, the laptop can be placed on top. 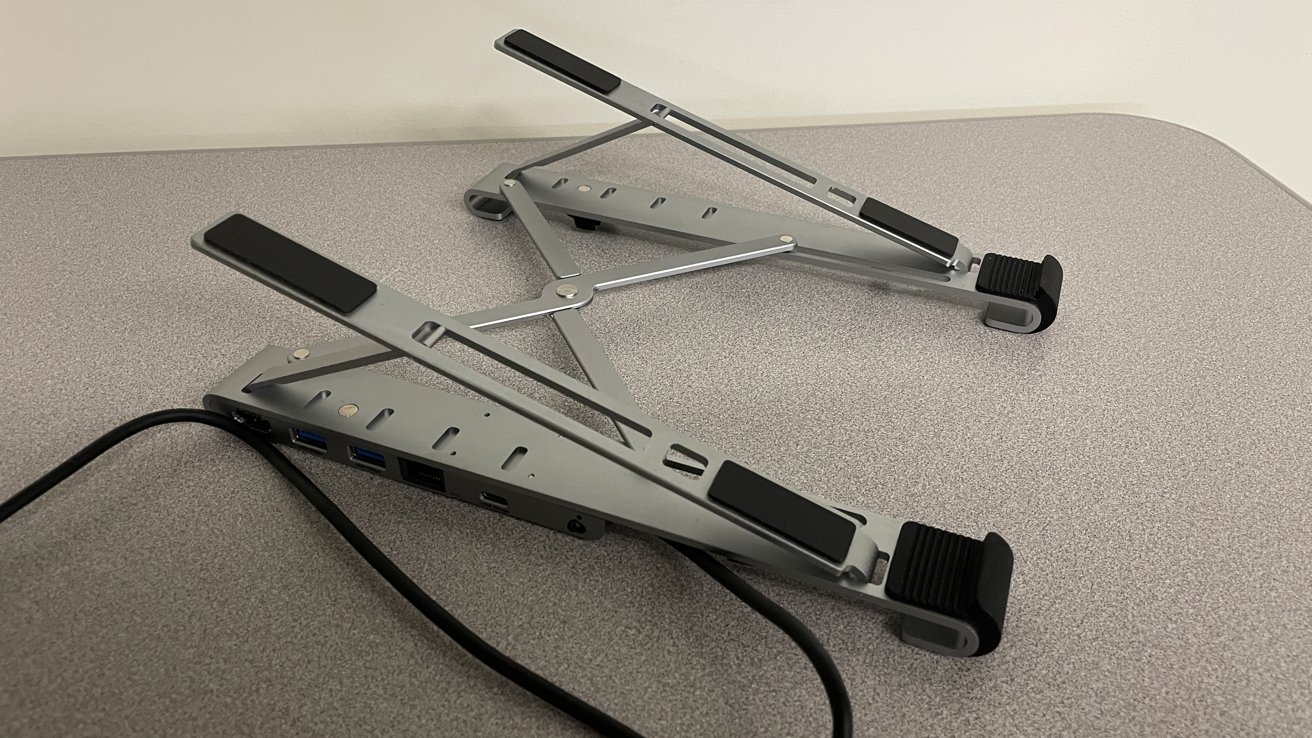 Even though the 4K Dock Stand is primarily made out of what appears to be anodized aluminum, it didn’t scratch the laptop. The points of contact on the stand featured rubber padding, so the MacBook Pro never has to contact the bare metal.

The cable to the included hub was plugged in to the MacBook on the stand to complete the setup. The connector was retrieved earlier from its cable management system at the bottom of the stand before assembly. 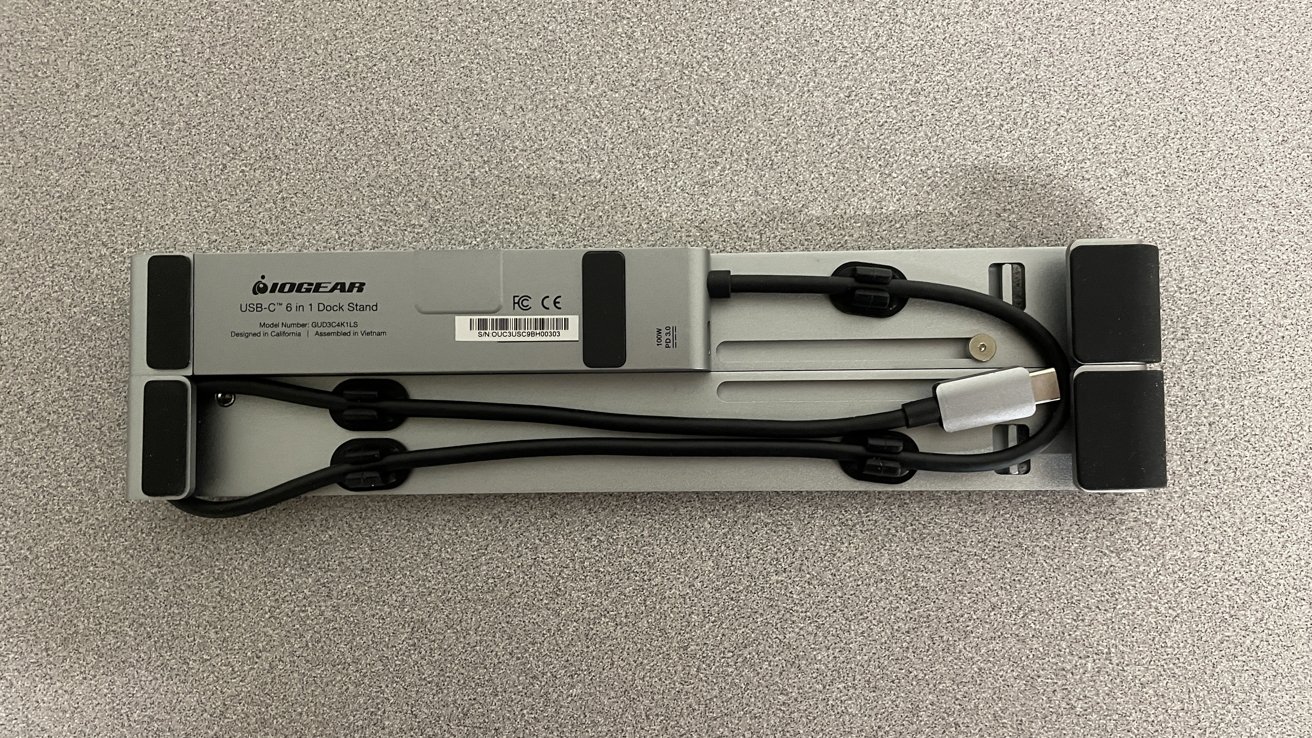 Immediately, we took issue with port positions on the 4K Dock Stand. Due to its design, the connectors are located directly below the inner third of the device, below the left Command key.

This position meant we had to reach below the device to plug anything in and required us to uncomfortably crane our necks to look for the proper ports. 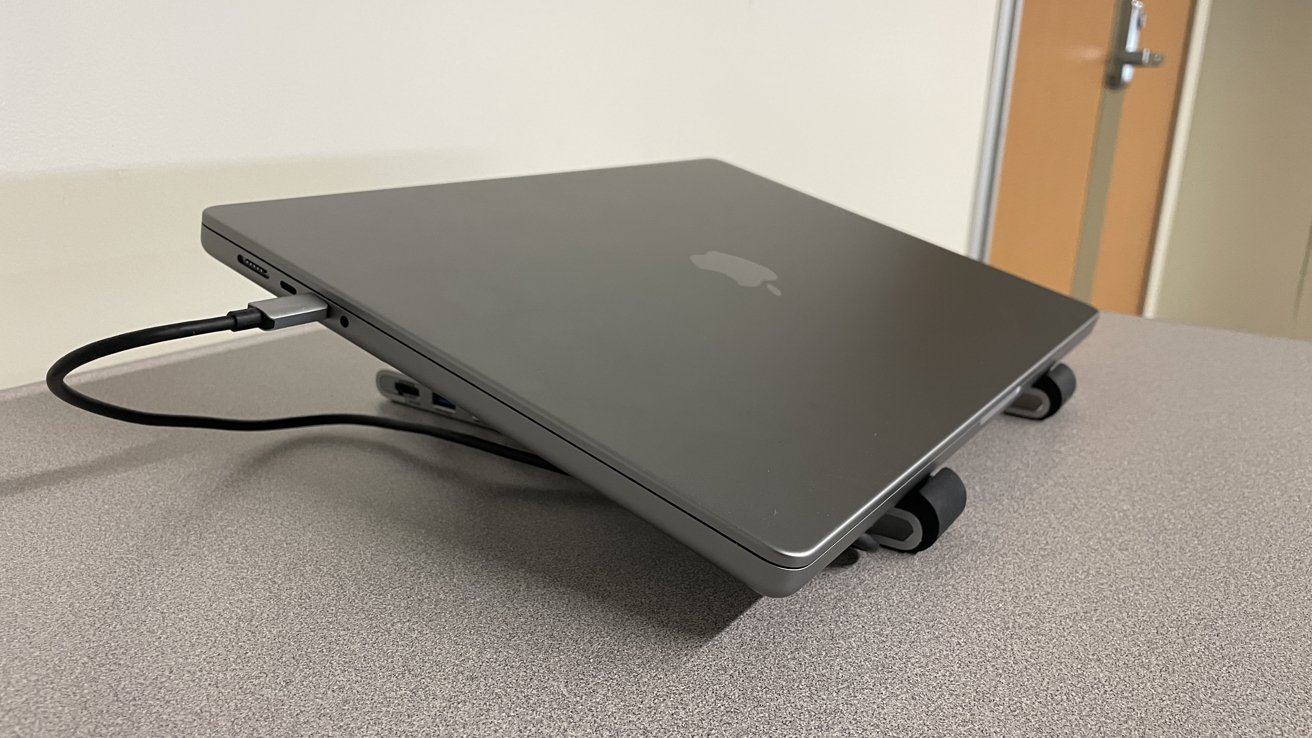 Perhaps the worst positioning was the Power Delivery port, which was right next to the hub cable at the base of the left foot of the stand. We found ourselves having to remove the laptop to plug in a power cable at all. 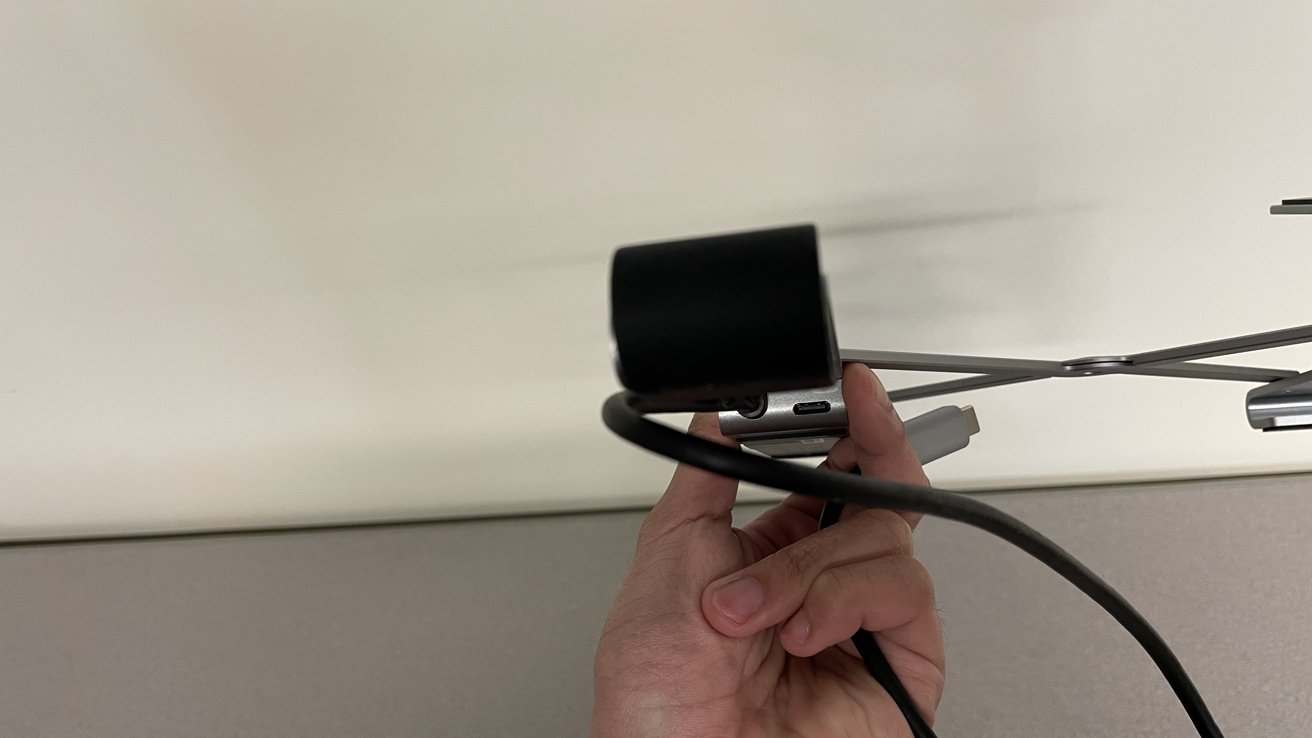 It is very inconvenient to use and an oversight in a design meant to be a semi-permanent dock setup.

The ports themselves on the 4K Dock Stand functioned as advertised. In our testing, we could connect to external displays with no issue at a nearby library.

The 4K display in the multimedia room we used for testing appeared to receive a signal that matched its hardware resolution.

We have also used a dual-connector flash drive to test both the USB-A and USB-C data ports, and they worked fine. Finally, a 100W adapter was connected to a USB-C-to-USB-C cable to test Power Delivery functionality, and it was able to charge the MacBook. 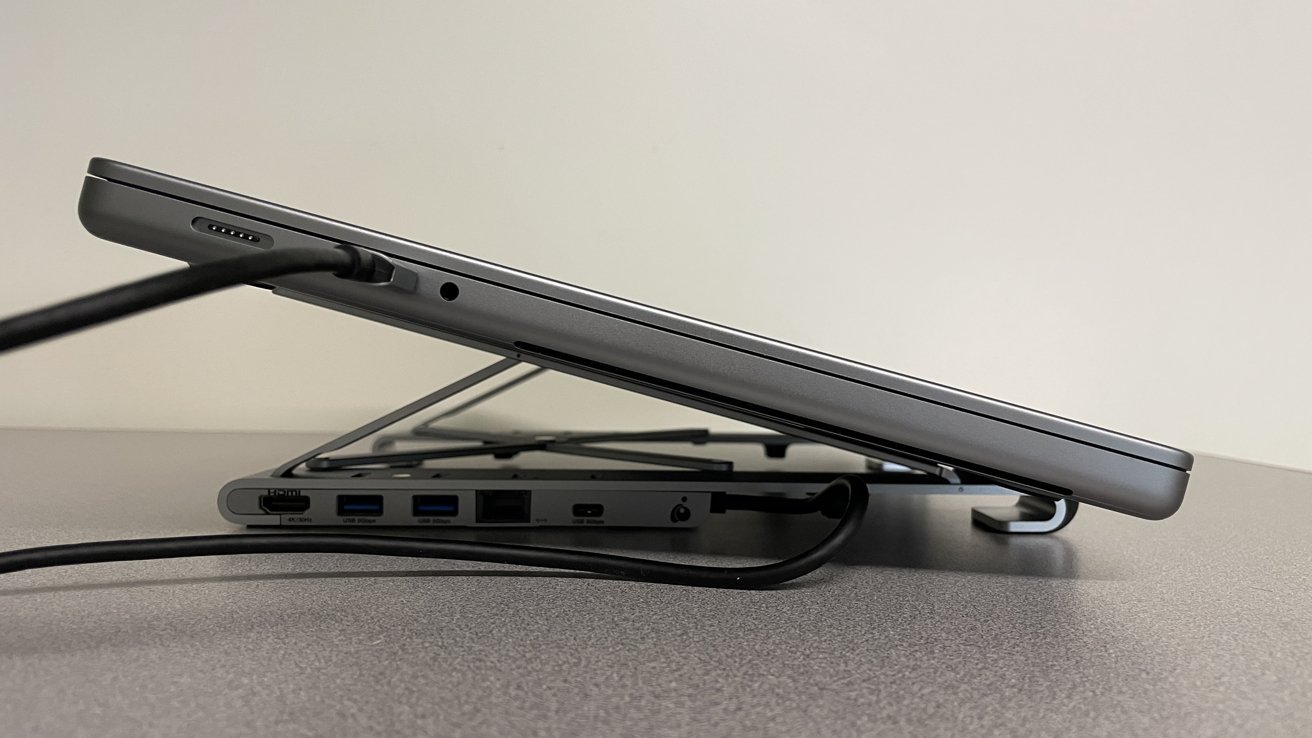 However, the mere 88W capacity is far too low to adequately recharge the new 2021 MacBook Pros, which use adapters rated for 96W and 140W, respectively. The 88W is enough to charge the 13-inch MacBook Air and MacBook Pro models at full speed while offering strong currents for charging larger MacBook models.

All the ports maintained a proper connection while a peripheral was plugged in.

We believe the addition of an SD card slot, which was much-requested for the MacBook Pros before their return to the lineup with the 2021 revision, would be invaluable for users on lower-end models who would like to remain productive.

While the current crop of 14- and 16-inch MacBook Pros, including the model used in testing, do feature SD card slots, users of MacBook Air and the 13-inch MacBook Pro will appreciate the extra convenience.

In testing, we found the adjustable levels on the 4K Dock Stand awkward for docking for the 16-inch model.

With the 16-inch MacBook Pro, we found that it only works up to the third-steepest level, with the steeper notches placing the laptop at far too high of an angle for the bottom latches to cradle the front edge of the device. This left the device dangerously dangling on the flat bases without proper support. 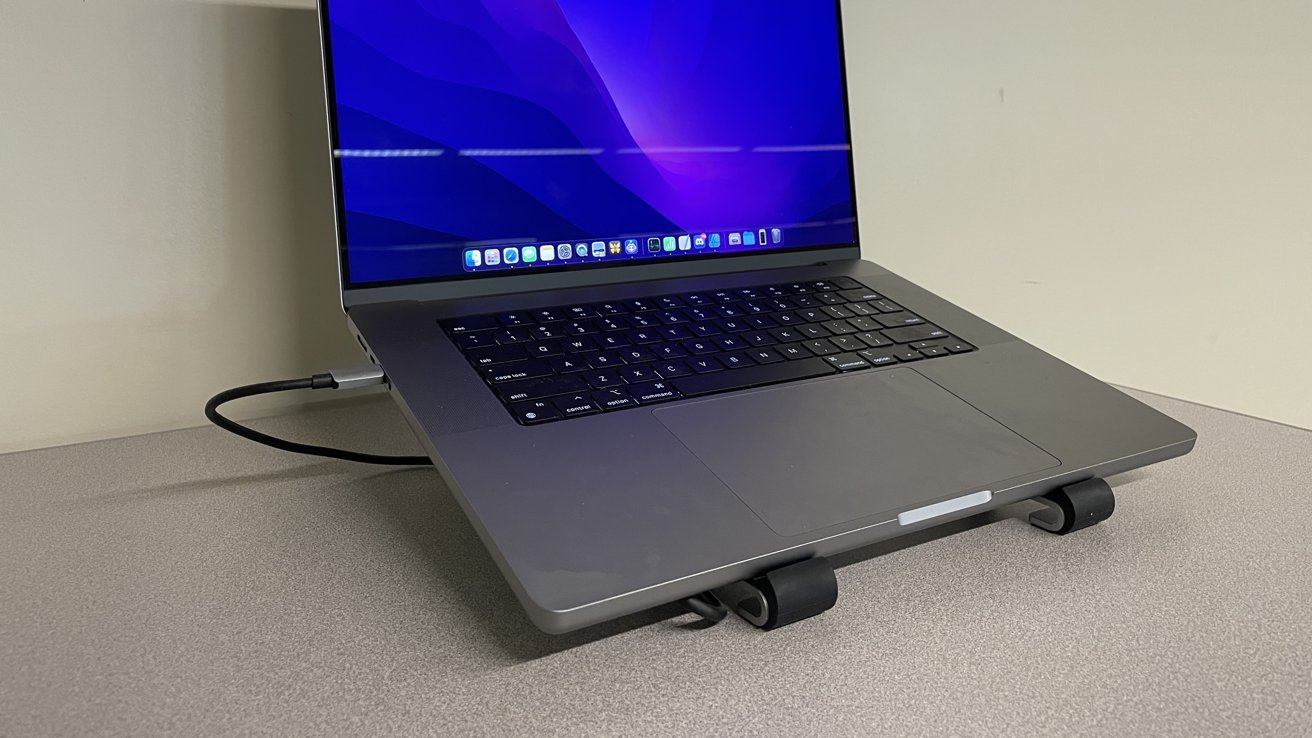 Even with the flatter levels, the latches managed only to hold onto the bottom half of the front edge of the bottom chassis, even as it is overall relatively stable, even while typing. 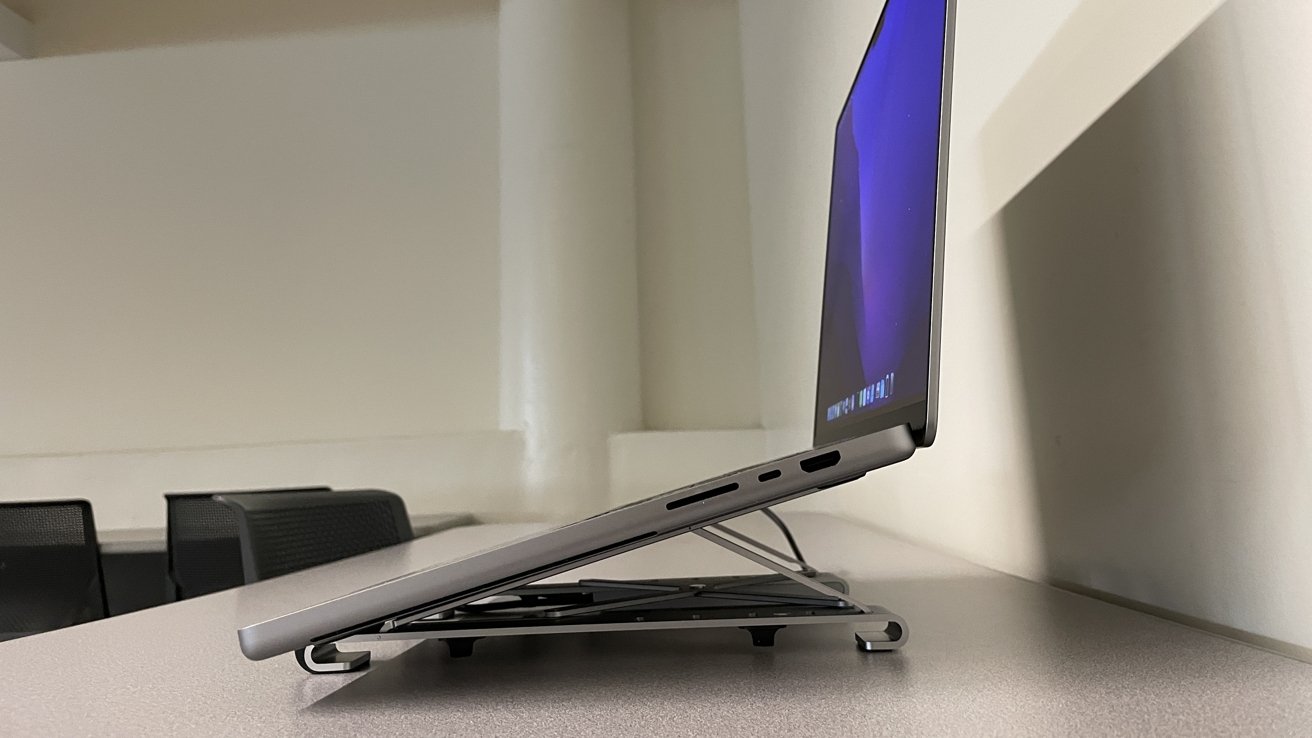 The ill-fitting physical design of the 4K Dock Stand led us to believe that this is better suited for a smaller laptop, such as the 13- and 14-inch MacBook Pro models. However, the off-putting positioning of the ports, as well as the design of the stand latching assembly puts that into question.

Should you buy the IOGear 4K Dock Stand?

We appreciate the diversity of the port types featured on the 4K Dock Stand and believe it is well-rounded enough to be fit for the vast majority of productivity use cases.

The ports were reliable, and the inclusion of the Gigabit Ethernet port was very welcome.

Unfortunately, the oversight in the stand’s design and the positioning of the ports made this rather odd to use. For a dock that prided itself on offering a robust stand option in addition to expansion, it failed to deliver enough to live up to the promises in our testing. 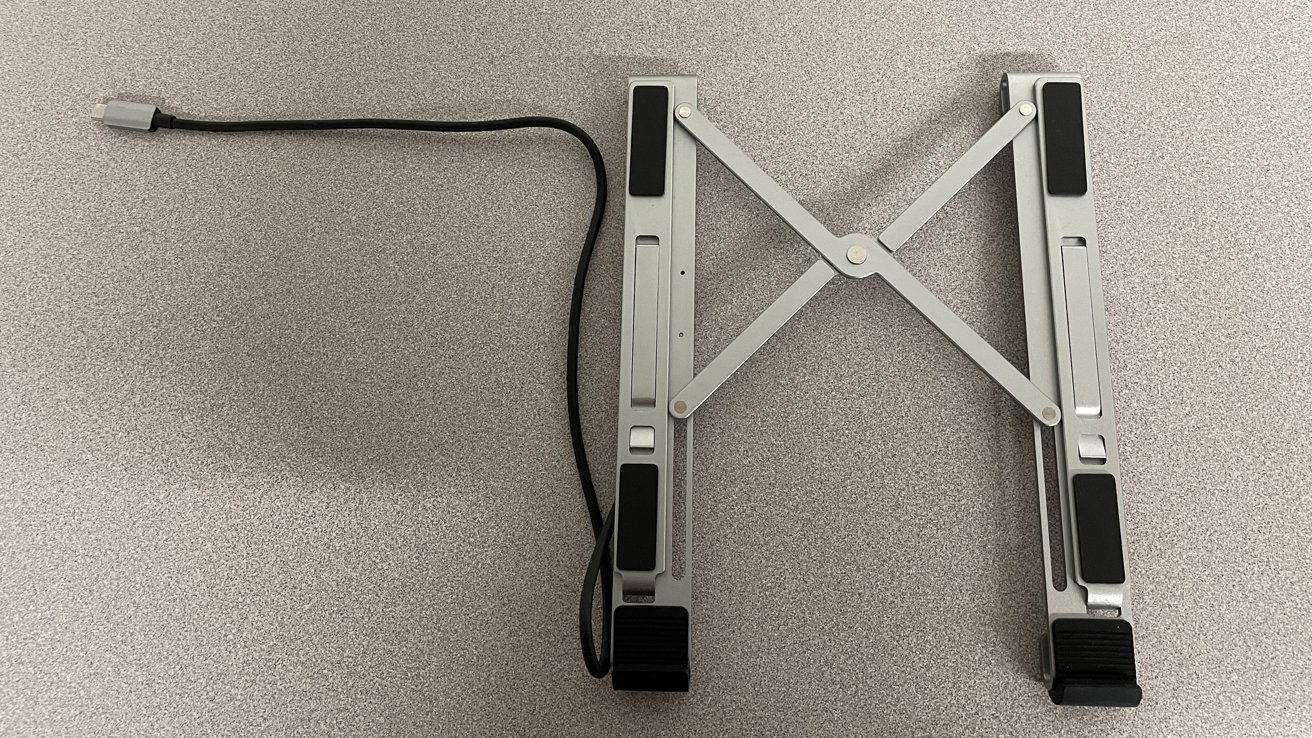 The smaller 88W capacity carried by the Power Delivery port, along with a stand design clearly tailored to supporting smaller, lighter devices, made the dock more suited for users of 13- and 14-inch models of the MacBook Air and MacBook Pro lines.

While it will charge all models of MacBooks with USB-C ports just fine, the mentioned models will be charged slightly faster.

However, the omission of an SD card slot that is common on other docks is a point of note for these users, where most buyers of this product tend to be more productivity-minded. The built-in SD card slot, which is still widely used in photography and videography, is only available on the 14- and 16-inch models of the 2021 MacBook Pro.

The IOGear’s Dock Pro 6-in-1 4K Dock Stand is a decent stand. It gets the job done, assuming that a dock and stand combo is what you’re looking for. It’s awkward for the larger Apple portable sizes, and better the smaller you go.

But if you’re in that venn diagram overlap of “need a dock with a bunch of ports” and “need the MacBook elevated and angled” this is for you, and a 4 out of 5.

But there are better options at this price point for everybody else.

Overall score for most users: 3 out of 5

Where to buy the IOGear 4K Dock Stand

The IOGear Dock Pro 6-in-1 4K Dock sells for $69.95 on Amazon, although clippable coupons are often available to discount the price further.