Although the iPhone isn’t nearly as powerful as a telescope, it’s still able to take good night sky photos. Here’s how to get started with it.

NASA revealed the first images taken by the JWST on July 12, capturing the early universe. It inspired a flurry of discussion on photography and the equipment needed to take good space photos. Astrophotography is really about long exposures, and that’s something the iPhone is capable of.

Long exposure photography captures the passage of time in a still image. Long exposure shots blur objects in motion, so stars appear as lines or trails, clouds are stretched out, and water is smoothed.

Keeping the camera shutter open for long periods captures this blurring of movement. The shutter’s speed and aperture determines how much light reaches the camera sensor. “Long periods” could mean anything from 5 to 30 minutes or more, depending on the desired outcome.

Apple released Live Photos alongside the iPhone 6s in 2015, which was the first step toward this category. In between a GIF and a video, a Live Photo captures activity just before and after a photo is taken. These photos capture motion, revealed by long-pressing the still image in the Photos app.

Night Mode automatically turns on when the iPhone detects a low-light environment. Then, the iPhone will take a picture quickly, or one that lasts a few seconds, depending on how dark it is. Users can manually configure the capture time.

That is the most affordable setup to take night sky photos with an iPhone, though it’s not available on all models. The iPhones that support Night Mode include:

Taking good space photos requires equipment to keep the iPhone still as well as software to capture images. Night Mode is one such option built into the system, but there are plenty of third-party apps for long-exposure photography.

The quality of space photos depends upon the equipment. For mobile astrophotography, the best results happen with telescopes designed to work with smartphones. Using a tripod is a more affordable and accessible option.

An iPhone on a tripod using a night mode app isn’t going to take images of the Cosmic Cliffs or even planets in the local solar system. However, the equipment listed here will improve basic pictures of the moon and ensure that stars appear in night photos.

GorillaPod is the most well-known brand for smartphone tripods. From the company JOBY, the legs of these mounts are comprised of ball joints for flexibility. Each leg can be contorted into nearly any position to keep the iPhone secure by wrapping around objects or positioned on the ground.

In 2021, we reviewed a line of GorillaPods designed to work with MagSafe iPhone models. These tripods are affordable enough for most budgets, receiving a score of 4 out of 5 stars.

The GorillaPod Starter Kit is an excellent option. It includes a universal clamp to support smartphones from various brands and different mounts for GoPro and other compact cameras. It’s available to purchase for $32.95 and is frequently found on sale.

Sandmarc is a brand that creates high-quality photography accessories for iPhones and other devices. Its tripod has two versions: Compact Edition and Pro Edition. The Compact version is lightweight, easy to assemble, and aimed at travelers. The Pro Edition is a full-sized tripod with a longer extension. 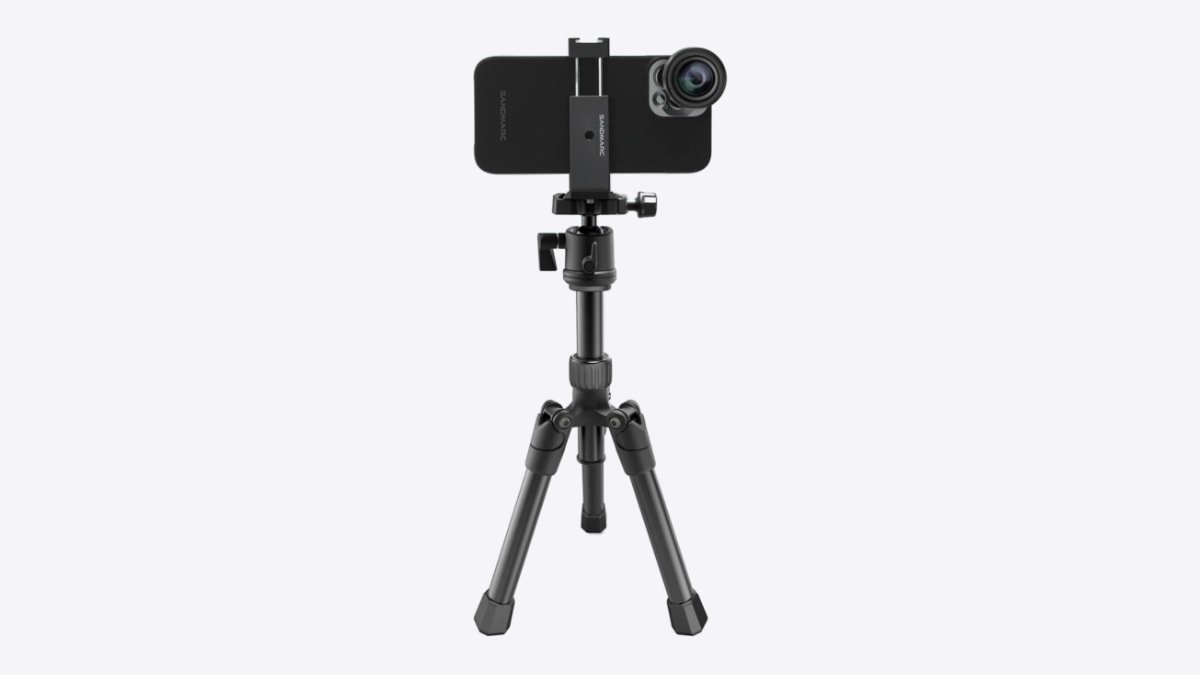 Each tripod is made of aluminum, and the package includes a ballhead mount and an iPhone mount. The Compact Edition is available for $99.99 and the Pro Edition is $199.99.

Peak Design has a mount that is even more compact than the Sandmark Compact Edition. This tiny tripod packs to a half centimeter thick, making this product perfect for pockets. It is compatible with MagSafe and snaps on and off in portrait and landscape configurations. 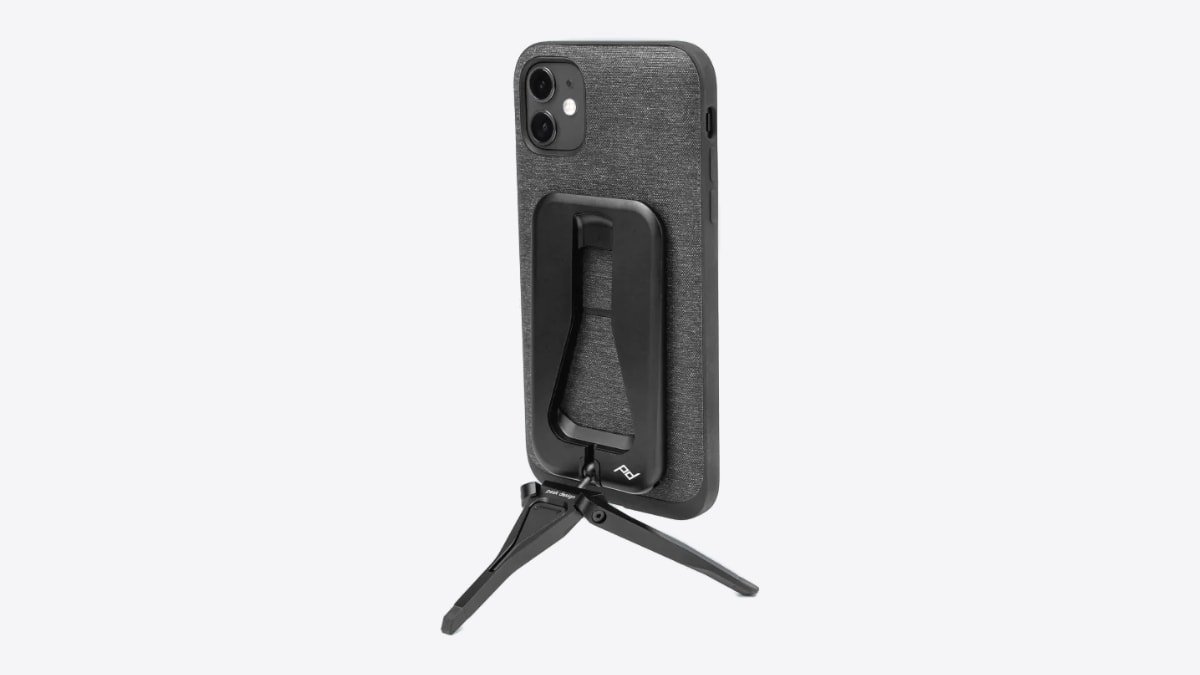 The aluminum legs have anti-slip capabilities with feet that can reduce vibration. In addition, a tiny ballhead mount adjusts the iPhone’s angle to capture multiple night sky views. Peak Design’s iPhone tripod is $79.95.

Taking pictures of the night sky can be achieved with Night Mode and a tripod. However, there are plenty of third-party apps too.

Halide is one of the most popular camera apps on the App Store. It offers all the manual controls a photographer could want, such as tuning the exposure, ISO, shutter speed, and white balance. Support for image formats includes RAW (DNG RAW), TIFF, HEIC, and JPG. 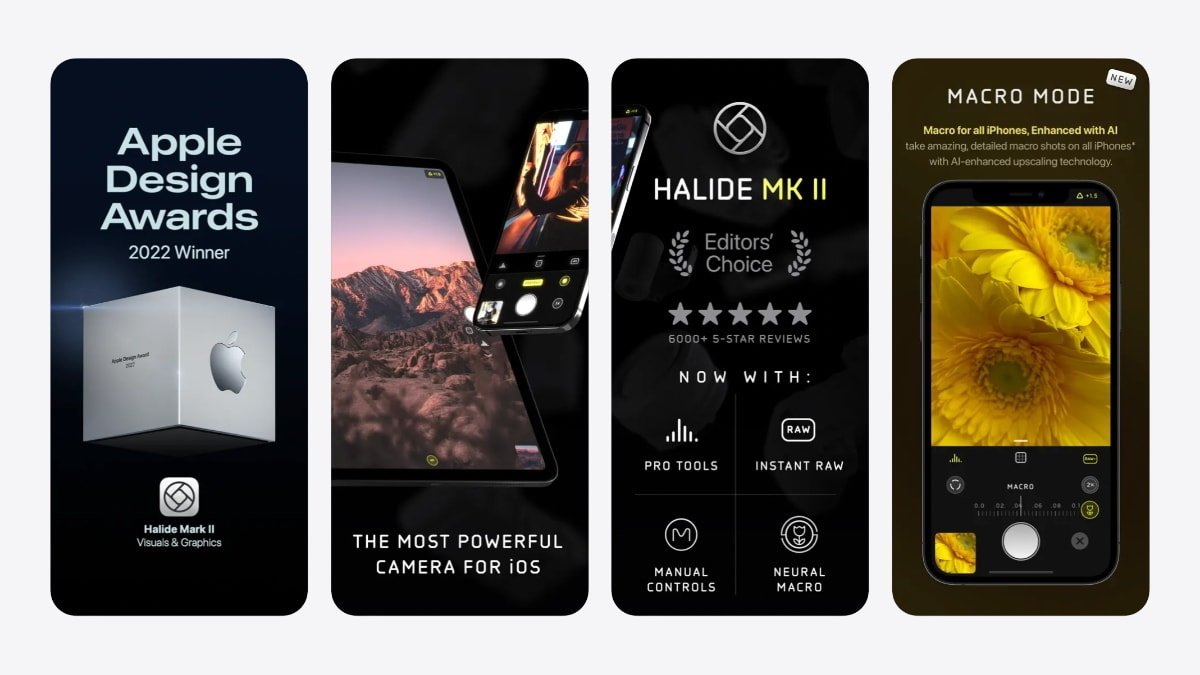 The app takes full advantage of iOS features such as Deep Fusion and Smart HDR. Halide is free to download with a subscription. 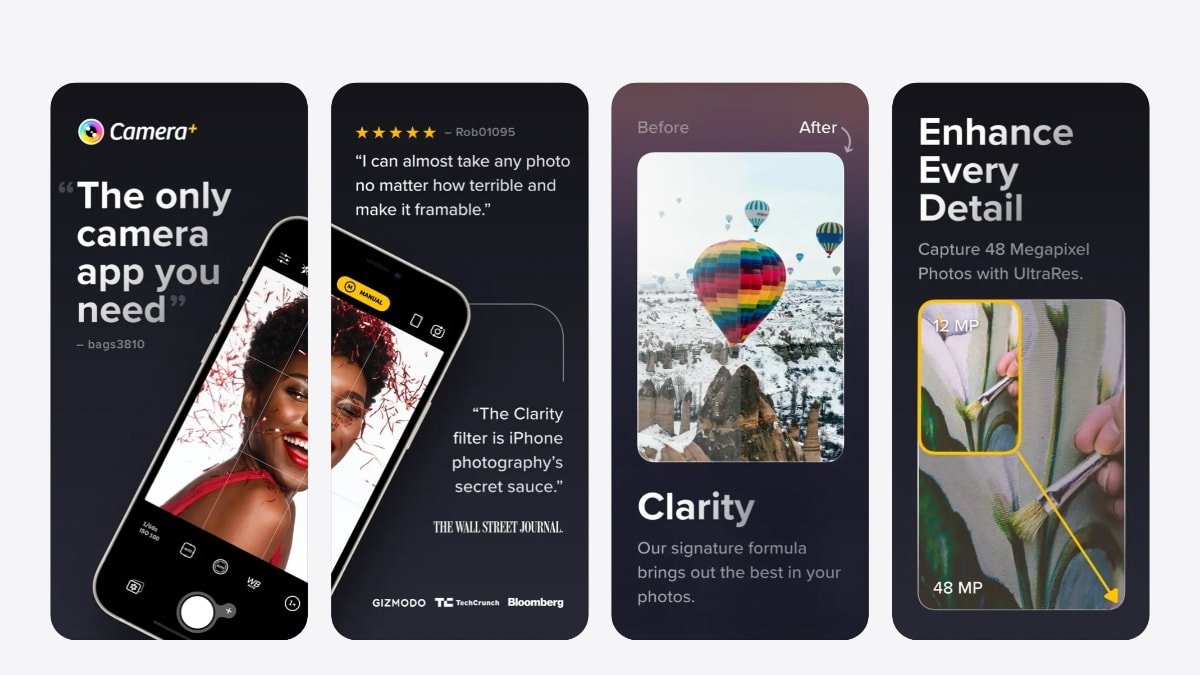 Screenshots of Camera+ app for iPhone

A powerful manual mode provides the controls that photographers expect, such as exposure, ISO, shutter time, and white balance. Camera+ 2 is free to purchase with an optional subscription. 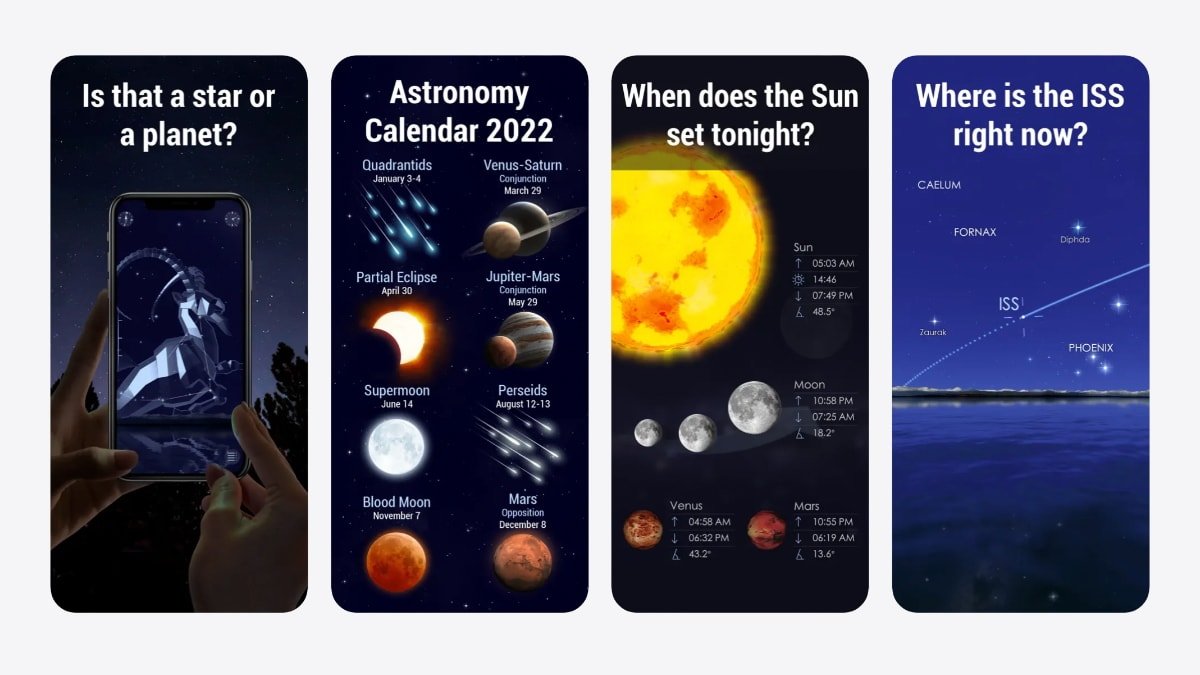 Screenshots of Star Walk 2 for iPhone

Using the app’s most powerful feature, an iPhone owner can point their device to the night sky in a live camera mode and precisely see which major celestial bodies are present. Star Walk 2 is available to purchase for $2.99.

These apps and equipment can help with iPhone night photography through editing controls and stability. In addition, there are a couple of extra things to keep in mind.

“Regular” photos taken with an iPhone use the JPEG format. It’s a universal format supported by virtually every camera and operating system. It uses a compression algorithm to save space by reducing the image’s file size at the expense of image quality. The JPEG format is known as a “lossy” image.

Next is HEIF/HEIC. Apple adopted the High-Efficiency File Format in iOS 11. Reducing the file size is this format’s strength, as HEIC files are even smaller than JPEG images.

Professional photographers use the RAW image format. A raw image file contains all or most of the data that the camera captures. It’s a lossless, uncompressed format that needs to be edited before printing or sharing.

Apple introduced its own variation of this format in iOS 14.3, correct image format”>calling it ProRAW. ProRAW takes full advantage of the cameras found in iPhone 12 Pro and later. ProRAW offers the unprocessed image data and Apple’s computational editing algorithms to enhance the images in a way similar to a JPEG or HEIC photo.

The RAW format is best for shooting low-light environments such as the night sky. Details of the images, such as shadows, can be “recovered” more easily than in a lossy image. It’s found on iPhone 12 Pro or later in the Camera settings under Formats.

Zoom is another aspect of photographic that can affect image quality. The iPhone supports two kinds of zooming: Optical and Digital. 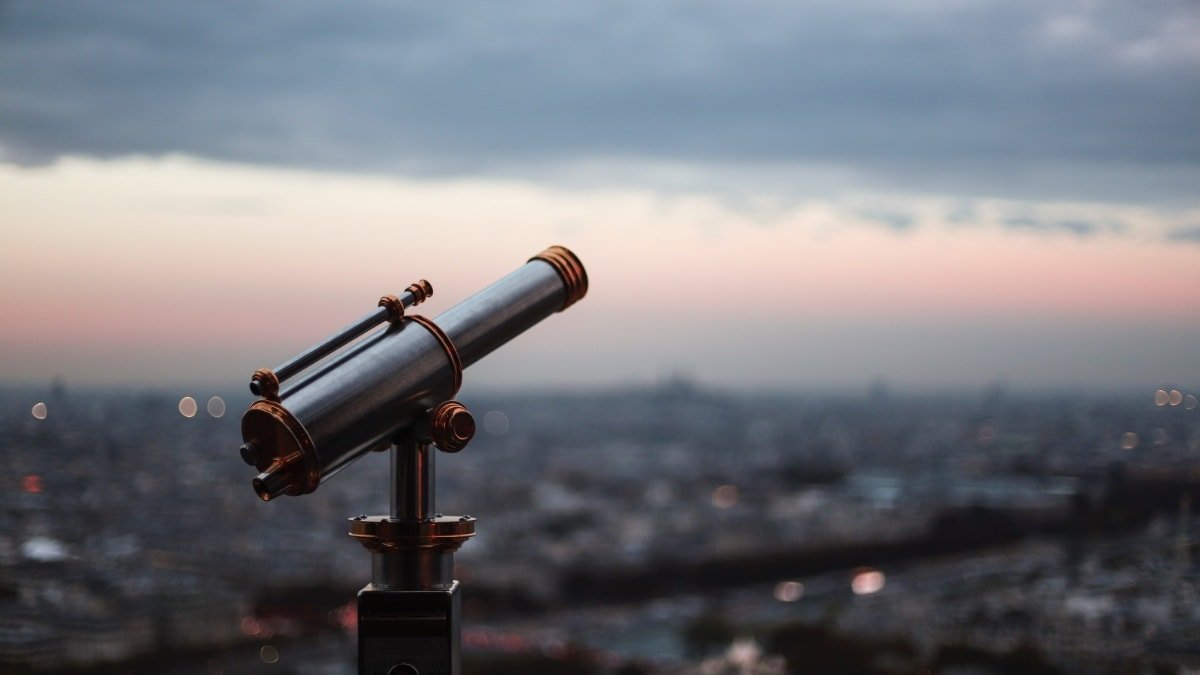 Photo by Matthew Ansley on Unsplash

Optical zoom, introduced in Apple products with the iPhone 7 Plus, uses a telephoto lens to capture more of the camera’s live feed. For example, the iPhone 13 Pro camera app displays three numbers on the screen: 0.5x, 1x, and 3x.

Digital zoom crops and enlarges the on-screen image. It sacrifices image quality because the camera lens is not physically moving closer to the subject, so optical zoom is preferred for the best quality. Pro, Plus, and Max models of iPhone have telephoto lenses for optical zoom.

For advanced iPhone astrophotography, there are plenty of iPhone-compatible telescopes, which are beyond the scope of this article. Telescopes are more expensive than an iPhone tripod, but they offer more zoom than the iPhone’s telephoto lens.

Optical zoom is the differentiating factor. These telescopes don’t connect to iOS or the iPhone camera, they offer a mount to take a picture of the telescope’s viewfinder.