It’s the summer, and that means it’s back to school. Here’s which MacBook Air and MacBook Pro models you should consider buying in the seasonal sales before students head off to college.

An annual sales event for many retailers, back-to-school is billed as the time when parents prepare for the upcoming year of education for their children, and more often than not, teenagers heading off to college. This usually involves paying for new computer equipment, and that’s where Apple steps in.

Apple’s MacBook Air and MacBook Pro lineup is substantial, covering both the premium and the value end of the market with hardware suitable for any task. From basic tasks such as writing reports to more processor-intensive applications for university work.

Here are Apple’s recommendations for which MacBook models you should consider if you’re in the market for a new portable Mac for learners in your family.

If you need a low-cost notebook that can handle most tasks, it’s hard to go wrong with a MacBook Air.

Packing the same brains as its 13-inch MacBook Pro counterpart, the MacBook Air offers all of the features and capabilities that a student may need. Everything from book reports to joining Zoom calls.

The M1 MacBook Air is still very useful as a budget-friendly notebook for college.

However, while you may expect us to recommend the new M2-equipped MacBook Air with all its new features, it’s not necessarily the best route to take if you’re talking value. It has the latest chip and numerous improvements over the previous model, but you can still get the M1 edition.

Indeed, with price being so crucial in modern times, families may feel that they could do a lot with the $200 difference in price between the $999 base M1 version and the $1,199 M2 variant. That $200 could pay for other supplies or a few meals at college.

The base M1 MacBook Air has two configurable upgrades, covering memory and storage. The entry-level model offers 8GB of memory, a 16GB upgrade, and 256GB of storage with 512GB, 1TB, and 2TB upgrades.

The budget-friendly recommendation will usually be to ignore the upgrades or go for memory first, then storage if necessary. External storage options exist, like an external hard drive or a flash drive for the latter.

If necessary, go for the $200 upgrade to 16GB of memory. It’s a notebook that’s going to be in use for a few years, so you will want it to have as much performance as possible, and that’s not something you can upgrade later.

We’ve already established the MacBook Air is a very capable notebook. The M2 edition is probably the best route for the mid-range category.

More expensive than the M1 MacBook Air, the M2 MacBook Air adds a lot more to the mix for relatively little extra money. For a start, you get a bit more screen, along with MagSafe 3 charging, a better 1080p FaceTime HD camera, and the Magic Keyboard to use. 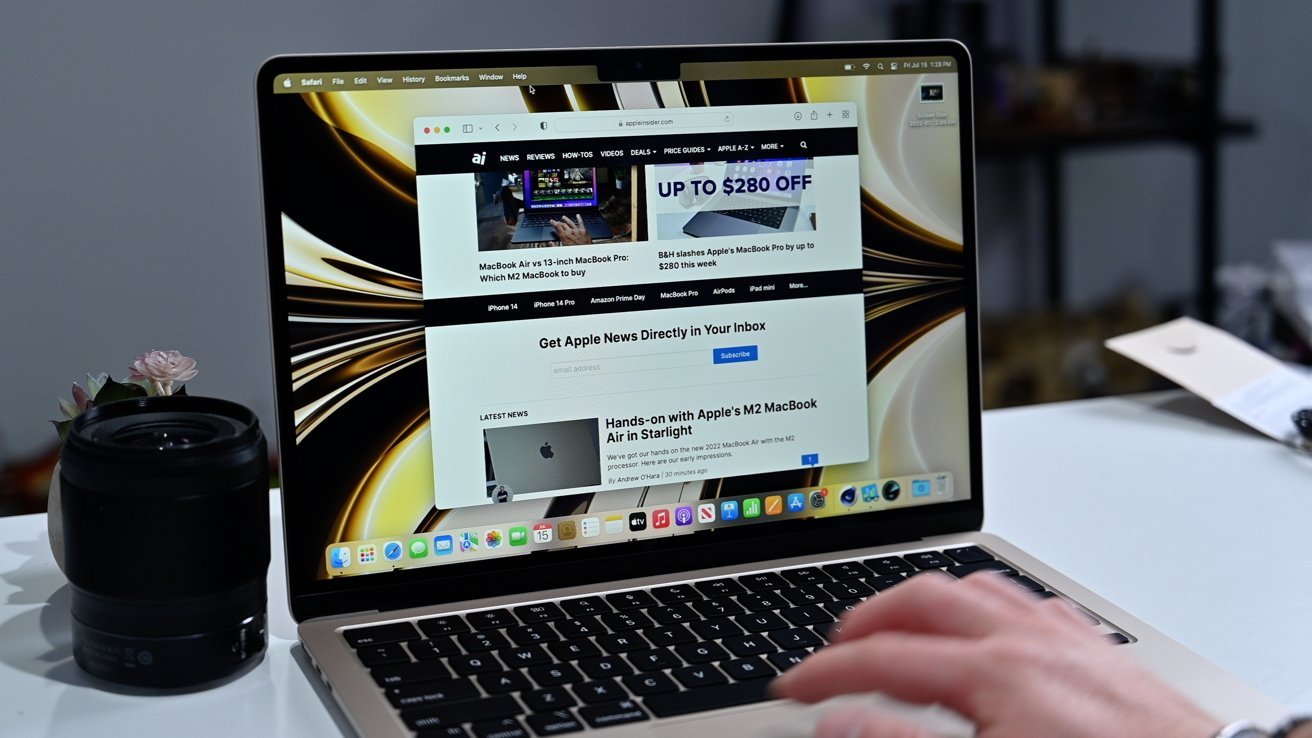 The M2 MacBook Air is improved in many ways, and is a good mid-range choice.

Then there’s the M2 chip, which is faster than its M1 counterpart, with better GPU and memory upgrade options, but it also has the Media Engine. Borrowed from the M1 Pro and M1 Max, the M2’s Media Engine encodes and decodes video much faster than usual CPU-based methods.

This is extremely useful for video editing and video-related projects, which are becoming more common in classrooms. Students working in film may still want to go for a more powerful model than the M2 MacBook Air.

Starting at $1,199, you get a decent base to build from, with the 8-core GPU, 8GB of memory, and 256GB of storage. You could upgrade to the 10-core GPU version for $100, but only if you anticipate the extra graphical power will be useful and if you have the spare funds.

Unified Memory upgrades go from 8GB to 16GB and 24GB, while storage starts at 256GB and goes to 512GB, 1TB, and 2TB. Since the memory affects performance more, focus on that for upgrades before paying into storage.

At this price bracket, it’s pretty acceptable to go for a low-level storage upgrade, if only so that you don’t have to use an external drive, but you always have the option of doing that to avoid the steeper upgrade fees.

AppleInsider’s recommendation would be going for the 10-core GPU, 16GB of memory, and 512GB of storage, which totals $1,699.

If money is no object, or there is a sufficient budget allocated for Mac purchasing, you should be looking at the 14-inch MacBook Pro.

The 16-inch MacBook Pro is also available and ships with a similar range of configurations, though starting from a higher specification. However, you can save $200 and some weight and space in the backpack by going for the equally good smaller model. 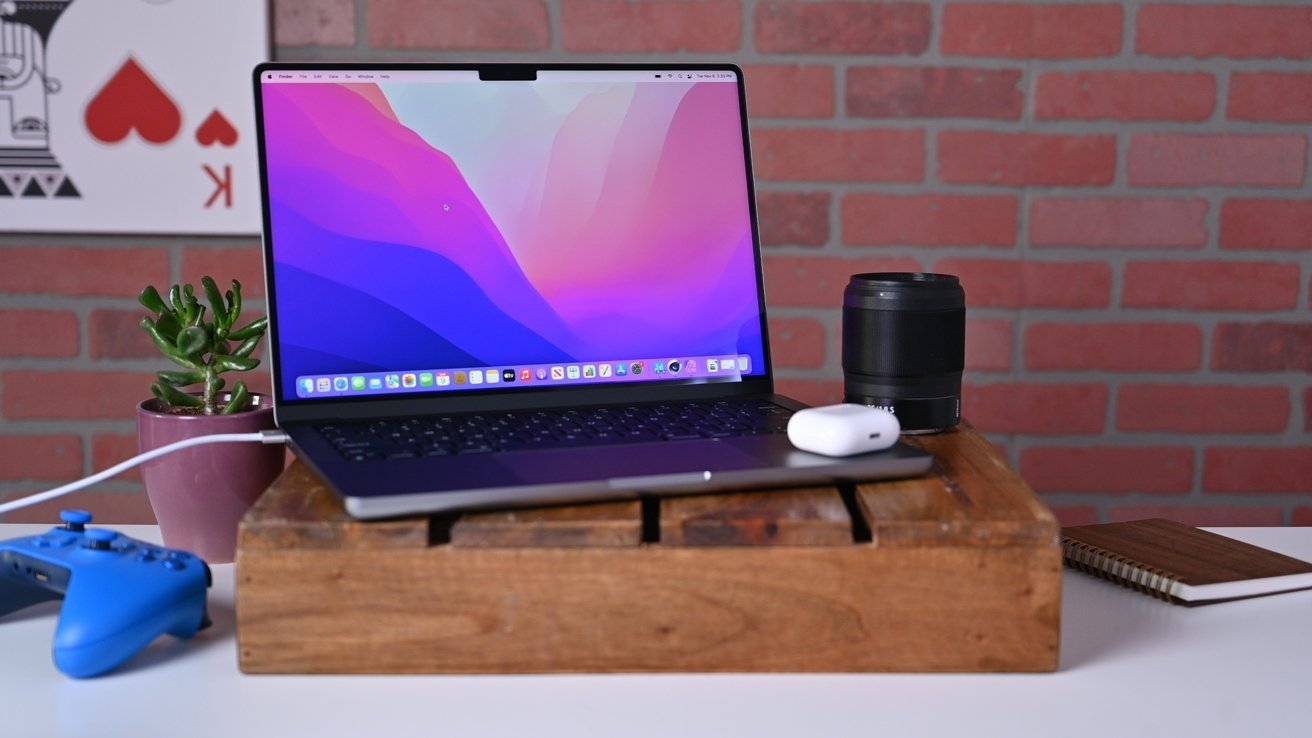 The 14-inch MacBook Pro is the best choice for college work with intensive workloads.

At this level, you’ll also benefit from many features that will become very handy for power users. That 14-inch display is one since it’s a Liquid Retina XDR screen with mini LED backlighting for a high 1,600-nit peak brightness for HDR content, a 1,000,000:1 contrast ratio, and ProMotion support.

Then you have many ports at your disposal, including an SD card reader, an HDMI port, and MagSafe for charging.

Like the M2 MacBook Air, you have the Media Engine, with the Max variants doubling the number, making them especially useful for people working in video.

You also get higher core counts for the GPU, higher starter memory of 16GB and 32GB in the Pro and Max, and memory upgrades to 32GB and 64GB, respectively. Storage also starts at a better 512GB, rising to 8TB if you can afford the upgrade fees.

Memory would be a good upgrade choice, but here’s a thing to consider. Going from 16GB to 32GB of memory is an extra $400.

However, if you were to go for the lowest M1 Max chip, with its 10-core CPU and 24-core GPU, that upgrade is $500, and you get bumped up to 32GB of memory as well. At a $100 difference between the memory upgrade and the chip-and-memory version, the extra cost is certainly warranted.

AppleInsider would recommend going at least one stage further than this and paying for the $200 upgrade to a 1TB SSD. Apple’s storage costs are steep at the high levels, but 1TB seems like a reasonable amount to go for without sweating over the price.

This recommended configuration will cost $3,099 (check sale prices), but for a computer that will be used for a fair number of years, it’s pretty worth it.

If you are searching for more money savings, you should see if you qualify for Apple’s educational pricing. Available to current and newly-accepted college students and their parents, faculty, staff, and homeschool teachers of all grade levels, Apple offers discounts on many of its products, including the MacBook Air and MacBook Pro lines.

It is well worth checking it out if you qualify. For example, the AppleInsider recommendation for the 14-inch MacBook Pro costs $2,839 under education pricing, saving $260. Otherwise, general shoppers can save $150 on the system itself, plus $40 off AppleCare, with this cost-saving activation link and promo code APINSIDER at Apple Authorized Reseller Adorama. Step-by-step activation instructions can be found here.

You can also find exclusive deals on hundreds of MacBooks, without having to be a student, in our Apple Price Guide.