One patent doesn’t prove Apple is making a device, but a whole series of them suggests we really could see a MacBook Pro you can wirelessly charge your iPhone on, while you sketch with your finger.

Apple does apply for countless patents every year, and a very great number get granted. Often it just means that Apple is exploring an idea and does not mean that there will ever be a product.

That’s still the case with the newly-granted “Device having integrated interface system.” But as well as presenting a very tantalizingly appealing MacBook Pro design, this patent has something else.

It’s got history. It’s got form.

This new patent is a continuation one, it follows on from a series of others. As well as directly citing 152 previous US patents, and 66 foreign ones, it specifies that follows four previous Apple patents of the same name.

Some of those have been spotted before. Each has described Apple making more use of the palm rest regions of a MacBook Pro, while some have proposed replacing that whole surface with a glass keyboard.

This new one is more about specifically what Apple could do with this space, and you’ll want one.

“Many electronic devices include one or more input devices such as keyboards, trackpads, mice, or touchscreens to enable a user to interact with the device,” begins the patent. “In some traditional electronic devices, the inclusion of one or more of the input devices may require the formation of a hole, opening, or seam through which liquid or other foreign matter may enter the device enclosure.”

“Additionally, the enclosure of some traditional electronic devices may be formed from materials that are easily scratched or that provide an inferior tactile feel or visual appearance,” it continues.

So while the descriptions in the patent are chiefly about the use of space such as the palm rests, it’s also about the material that devices could be made from.

“[The proposals] described herein are generally directed to electronic devices having an enclosure formed at least partially from a transparent, dielectric material such as plastic, glass, or a ceramic material,” says Apple. may improve the look and feel of the device without having the drawbacks of some traditional device constructions.”

Putting it to use

If you can control the entire surface of a MacBook Pro, then you might replace the keyboard part as previously suggested, but then there is so much else could do.

First, there’s the suggestion of a built-in iPhone charger. You could place your iPhone down on the MacBook Pro and have it be charged automatically.

That’s now a lot easier to imagine that it was back in 2018 when the first version of this patent was filed. Now we’re used to wireless charging being a common feature, and what’s more, we have MagSafe.

So we know we could be sure of positioning the iPhone correctly over the charger. And we know we’re unlikely to knock it out of alignment while typing.

What’s less clear is just exactly how we would continue typing with this slab of iPhone beside our palms. But it is clear how Apple is thinking of taking its palm detection technology further.

So if you are resting your palms on this surface, it register that and doesn’t react to every slight touch or movement. If you don’t have your palms resting on it, then the surface can very well switch to respond to the smallest of movements that it detects.

That means the regular palm rest and instantly change to be something much more responsive. Such as an input device.

Specifically, that wide surface could effectively act as a graphics tablet.

“[It] may be integrated with multiple sensors, including touch and force sensors, that can detect various types of inputs applied to various regions of an input surface,” says the patent. “In some instances… the integrated interface system may also be used to detect gestures and multi-touch inputs applied to keycaps of a mechanical keyboard, allowing the keycaps and keyboard region to function as a trackpad.”

That doesn’t initially sound revolutionary, as it appears to be replacing one trackpad with another. The technology would be different, but in use it would work the same.

Except this needn’t function as a regular trackpad, and it needn’t be in the same position as current ones. If any part of the surface can be turned into trackpad, some of it can be used for drawing with. 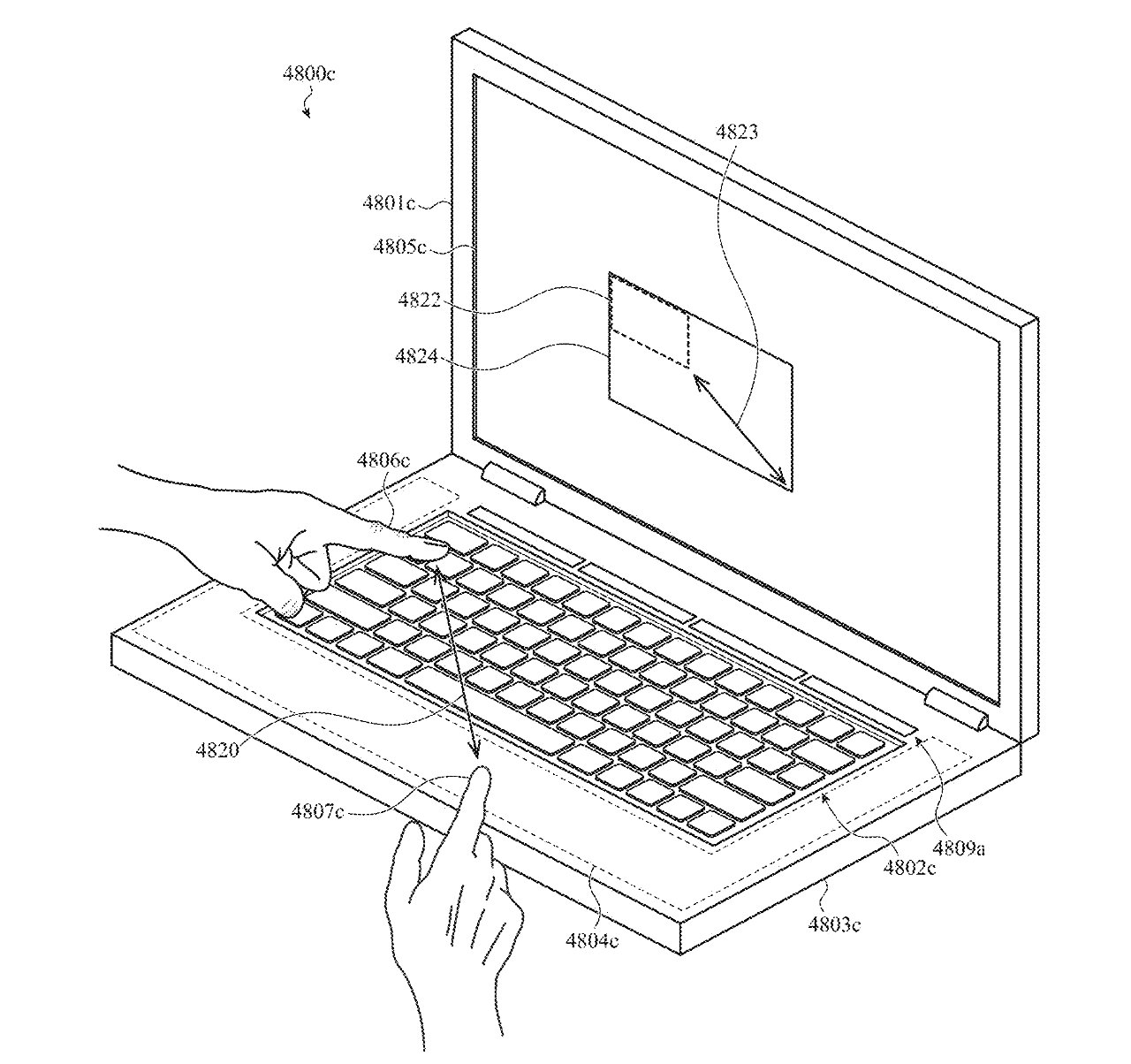 Detail from the patent showing how, even with a keyboard displayed, you could draw lines on screen

Apple has even bigger plans.

“Such sensors and/or input devices may be located in any suitable portion of or location in the device,” it says.

So your MacBook Pro could be helping you monitor your health throughout your working day, for instance.

This patent is credited to 13 inventors, the great majority of whom have worked on the previous versions too.

It could still be that none of this makes its way into future Apple devices. But if it does, then — patents or no — you can be sure other manufacturers will copy it the way they did the PowerBook’s trackball design.